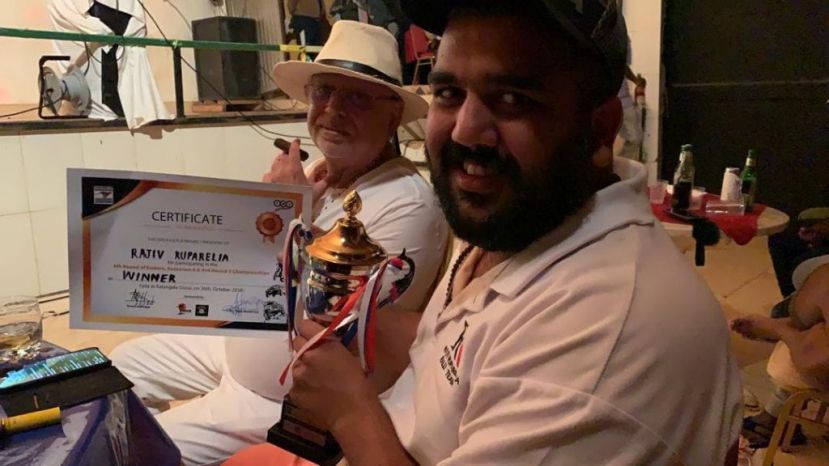 When Rajiv Ruparelia revealed that he would be joining the motorsport fraternity as a racer in April this year, little was known that this dream was nurtured from infancy through to the teen years when he was joining the university.

In a Facebook post on 2nd December 2008 to his uncle Dipu Devesh Ruparelia, Rajiv's passion to sit in the cockpit, behind the steering wheel racing is evident as he begs the good old uncle to talk to his father Sudhir Ruparelia to let him join motorsport.

"Yeah, well I wanna do it but my dad ain't letting me. I think after university, I’m gonna take it up. But for sure, talk to my dad. I am sure with the right amount of training, I will be able to do it. And don't worry, the Ruparelias are always the best,” he posted on his Dipu's social page back in the day.

While the older Ruparelias didn’t grant Rajiv his wish at the time, he was able to go through university to earn a business degree. His father fast-tracked him into the family business to rise to the rank of managing director of Ruparelia Group.

And now that Rajiv has stabilized into the stewardess position of the Ruparelia Group, he resurrected his motorsport dream and enrolled at prestigious South Africa’s RallyStar Motorsport Academy under the watch and mentorship of director Leon Botha to get the right training and skills to be able to compete in Uganda.

“In contrast with some students, where one is slightly hesitant to issue an unconditional recommendation-based on talent and application thereof, I have no hesitation in stating that Rajiv has been the best experience I have had or shall I say enjoyed, from an inexperienced rally driver,” Botha said of Rajiv's abilities inside a rally car.

Upon graduation from the South African academy, Rajiv in the month of May bought a rally car, a Volkwagen Polo Proto, which he unveiled to his fans at a pompous party which was held at Speke Hotel’s Rock Bar.

The rally experience at Rock Bar was attended by the most influential people in the motorsport world including officials from various motorsport clubs. Speaking at the event, many of them welcomed and wished Rajiv Ruparelia Rally Team the best and offered to help him acclimatize into the sport.

“Rajiv, we welcome you into this sport. You are the new kid on the block. The good thing is you have come with a good car,” one official said. “We ask that you inject in more money into your adventure as this is a sport that requires money,” he added.

Rajiv promised to give his best explaining that Rajiv Ruparelia Rally Team is a brand that is not just about rallying but also supporting the community. His fans nicknamed his rally car Double Trouble.

Rajiv pulled off a stunner when he won the FMU Autocross Championship 2019 in Kayunga ahead of the experienced Lwakataka who came in second place, Ronald Sebuguzi in third while Arthur Blick Jr settled for fourth.

Rajiv didn't let success in his maiden two races get into his head but rather he chose to tread carefully as he integrated into the motor rallying fraternity of Uganda. He said he was still learning from experienced drivers.

In August, he made his Pearl of Africa Rally Championship in Busiika and Kayunga where he exceptionally performed well. Because of this continued good performance, Rajiv was recognized at the India Day with the Indian Achievers’ Award 2019 for the Upcoming Sports Personality award.

From his maiden appearance at Enduro in Ssisa, Rajiv has won rally race after rally race something that has qualified him from the beginners' Clubman Championship to be able to race in the senior side events like National Rally Championship next year.

He is taking off time from the races tracks and through Victoria University, Rajiv is helping motorsport to professionalize and improve on matters of safety. In October, Victoria University offered free first aid training to motorsports rally drivers and co-drivers from different clubs in the country.

It was a mix of theory and hands-on skills training conducted in the well and fully equipped nursing skills laboratory of Victoria University.

He one time told the press that he is the sport to feed his strong passion for motorsport. But it looks like he is not feeding alone. He is sharing with the motorsport fraternity.

Commenting on how far he has come to live this dream, Rajiv said: "When they tell you your dreams can’t come true look them in the face and laugh. Tell them that just because their vision doesn’t see your dreams doesn’t mean they aren’t achievable. Believe in yourself and see what persistency and hard work does for you,"

Rajiv has been persistent, has worked hard, and now we are going to be watching, cheering him next as he competes with the big boys, in the National Rally Championship and God knows which other events.