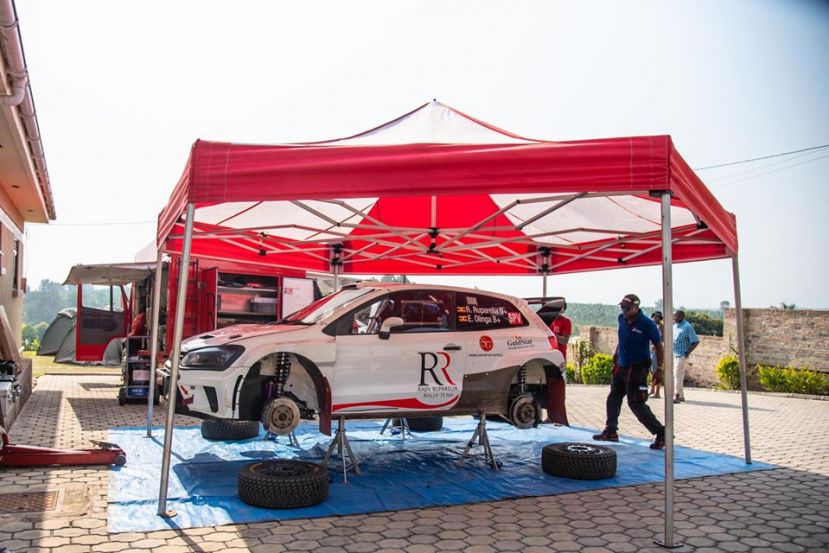 The technical team of Rajiv Ruparelia Rally Team preparing their VW Polo ahead of the NRC season opener in Mbarara.

The city of Mbarara is bevvy with rally activities and personalities ahead of the Rukaari Lake Mburo Rally 2020 also known as Mbarara Rally, the National Rally Championship (NRC) season opener on Saturday and Sunday.

The NRC opener has attracted 30 crews but Champion Yassin Nasser and runner up Arthur Blick Jr. ruled out. Information from Mbarara suggests that Ronald Ssebuguzi, navigated by Anthony Mugambwa, will open the route.

And this year, the NRC title chase has a new challenger in Rajiv Ruparelia who was impressive last year in beginners Clubman Rally Championship.

Now buoyed by the good results last year, Rajiv Ruparelia is optimistic that he can clinch the title this season and learn more about the sport he loves most.

“I still have a lot to learn. But I will try to maintain my pace and see if I stand a chance with this year’s title,” Rajiv is quoted by Kawowo Sport saying. “It has been a lot of learning from the time I joined the competition," he added.

“Just because I have been winning stages before it doesn’t make me the best yet. The truth is, I am not even forty percent as a driver,” Rajiv, who drives a Volkswagen (VW) Polo Proto, said.

It surely is going to be a long year for Rajiv but he has his ambition and work cut out and to achieve all this he assembled a  team that will spur the Rajiv Ruparelia Rally Team to great heights.

Like his maiden year in the cockpit, Rajiv will be riding with Enoch Olinga as his co-driver and has no plans of changing that unless the reason is unavoidable. “I am after building talent. I have no reason for changing a co-driver. We can only improve each other," he said his cockpit-mate.

“I am putting up some systems in place that will manage my progress. It’s the reason I have a manager, a chief mechanic, a professional trainer. All these will make me a good driver ready for big races. That’s what matters now,” he asserted.