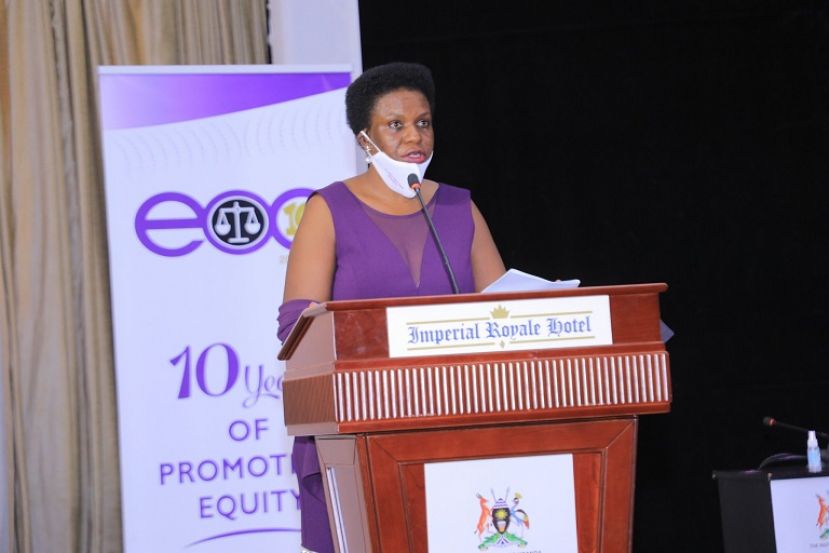 EOC’s Ntambi is facing charges of conspiracy to defraud the government of Uganda and neglect of duty leading to gross mismanagement of commission funds in the Anti-Corruption Court. She was summoned to appear before Her Worship Pamela Ocaya Lamunu, the Chief Magistrate, butt keeps dodging court giving peculiar excuses.

According to Kaluya’s letter written on 19th October 2020, on 22nd September 2020, Ntambi sent a lawyer from Kagwa & Kagwa Advocates claiming she was out of Kampala and requested to appear on 7th October 2020 to which the chief magistrate granted.

But still, she was a no show on 7th October 2020, instead, through her new lawyer, MacDusman Kabega, Ntambi tendered documents before the court claiming that she was admitted in Medik Hospital in Kawempe.

“Ntambi deceived court that she was suffering from chronic hypertension and that her condition required a major operation at Medik Hospital in Kawempe,” Kaluya notes in the letter to Nakalema.

It was however revealed in the media that Ntambi had never been admitted or scheduled for an operation at Medik Hospital. Days earlier, Her worship the chief magistrate had directed MacDusman Kabega to produce Ntambi in court on 29th October 2020 to take a plea or else be arrested forthwith.

“It has been widely observed that Ntambi Sylvia openly abused and insulted the courts of law. In fact, the chief magistrate tasked the DPP to investigate whether Ntambi was sick as alleged,” Kaluya said.

“We propose that concerned state agencies like police and state House Anti-corruption unit should support the DPP's office and expeditiously investigate this matter to enable the Chief Magistrate to make an informed decision. The video clip captured by investigative journalists at Medik Hospital in Kawempe gives a clue,”

“Consequently, the Directors of Medik Hospital must exhibit professionalism by openly telling Ugandans how the embattled chairperson of EOC acquired documents purportedly issued by the health facility. This needs to be urgently investigated and findings submitted to the court,” Kaluya concluded in the letter which he shared with different relevant agencies.

More in this category: « Have Proper Succession Plan For Your Family Business Sylvia Ntambi Spotted At DPP’s Office Ahead Of Court Appearance »