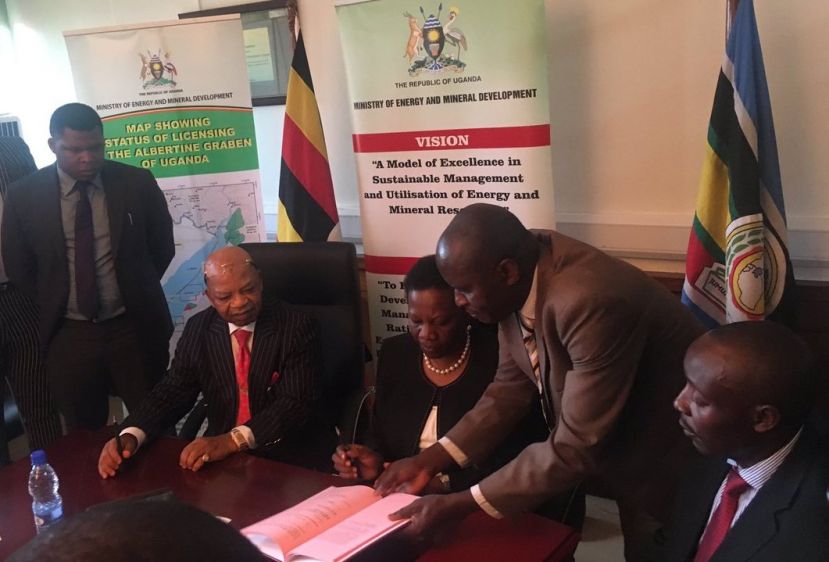 After a long period of negotiations, the government of Uganda has awarded two Petroleum Exploration Licenses to Oranto Petroleum Limited. The licenses covers the Ngassa Block, under Lake Albert, in the Albertine Graben, Western Uganda.

Oranto also signed two Production Sharing Agreements (PSAs) with the government of Uganda at the Ministry of Energy and Mineral Development offices in Kampala.

The minister said this type of licensing is provided for in the Petroleum Act of 2013. The licenses covering 410 square kilometers given to Oranto have a life span of fours split into two periods of two years.

“During the first two years, the company will reprocess existing seismic data, acquire new seismic data, and carry out geological and geophysical studies as well as feasibility studies for drilling from the lake with a minimum expenditure of $2.4m.

“During the subsequent two years, the company will acquire more seimic data, construct a drilling facility and drill at least one well on the lake at a minimum expenditure of $29m.” the minister said, quoting snippets of the PSAs.

The minister expressed confidence in Oranto who have experience of over two decades and operating in nine countries. She however challenged them to do a good job and also transfer that experience to Uganda.

Prince Arthur Eze, chairman Oranto Petroleum Limited, said they have performed in other countries therefore they will perform as per the details of the contracts signed.

The energy ministry permanent secretary Robert Kasande noted that the signing of the PSAs and issuance of licenses to Oranto will bring ‘accelerated oil and gas activities in the country by the end of next year.’

Kasande revealed that the Ngassa Block, which was initially part of EA2 which is licensed to Tullow, is covered with good quality 2D and 3D seismic data acquired between 2003 and 2008.

“Since the structure lies entirely under the lake, two deviated wells, Ngassa 1 and Ngassa 2 were drilled on land at the periphery of the main structure between 2007 and 2009 respectively in order to access the reservoirs.

“Both gas and oil shows were encountered by the two wells. However, a large part of the structure still remains untested, hence the need to license it.” Kasande explained.

More in this category: « Off-grid Solar Set To Triple In Africa, IEA Report Says To Stop Or To Support Eacop »