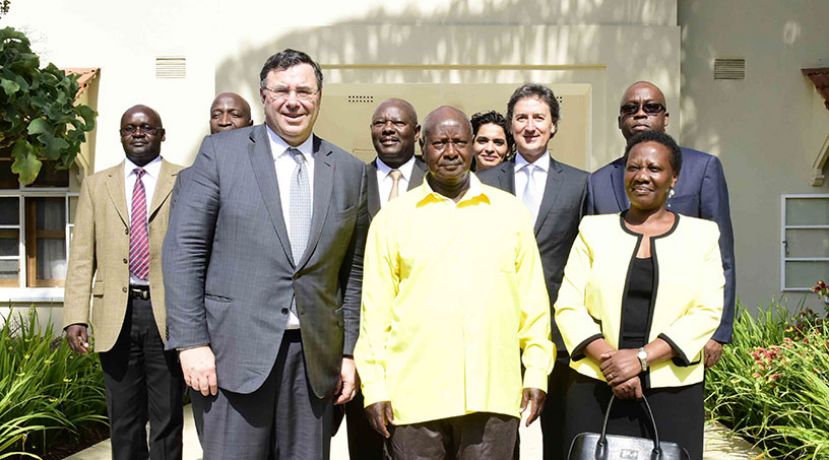 Patrick Pouyanné met President Museveni when he came to Uganda

French oil and gas exploration firm Total E&P has said they will continue pursuing their agenda in Uganda despite the global industry instability that has seen crude oil price slump to a record low of below $27 per barrel.

“Total remains committed to work towards producing the Ugandan oil resources as soon as possible because Uganda oil resources are potentially low-cost resources which will be competitive in the market,” Adewale Fayemi, Total E&P’s country representative to Uganda told Daily Monitor in an interview.

He explained that when you consider the resources used to produce oil in Uganda and compare to places that need deep off-shore facilities, Uganda is cheap and competitive.

Total has been in Uganda for 60 years and is willing to developing its presence along the value chain in Uganda and be the partner of choice in the oil and gas sector. He believes that the oil sector is going to be a game changer for Uganda.

Total E&P submitted their Field Development Plans (FDPs) at the end of last year in quest for government to issue them with production licence. Government is reviewing their submission and the explorers are optimistic the FDPs will be approved and production licenses awarded soon.

CNOOC is the only one of the three oil companies operating in Uganda to have been given a production licence. Total E&P and Tullow are on the sideline waiting. The government of Uganda committed themselves last year to give out production licence but didn’t.

Oil companies have in the past quietly expressed their displeasure over the delayed issuance of production licenses. Patrick Pouyanné, CEO and Chairman of Total while meeting Uganda’s President Yoweri Museveni expressed desire to produce Uganda’s oil resources as soon as possible.

Pouyanné insisted on the company’s long term commitment to Uganda and his willingness to develop the investments of Total along the oil value chain in Uganda, upstream and downstream to be the partner of choice for Uganda in the oil sector.