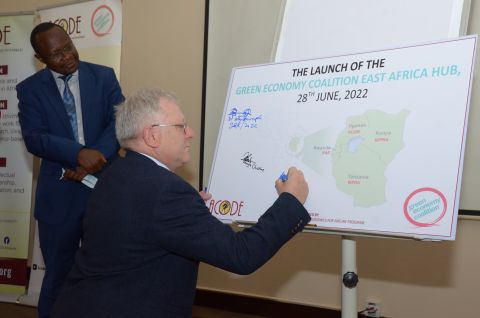 The East African region is making a deliberate effort to transition the economies of Uganda, Rwanda, Kenya and Tanzania into the sphere of the green economy under the stewardship of Advocates Coalition for Development and Environment (ACODE), a Ugandan Think Tank.

In this region, ACODE has teamed up with the Institute of Policy Analysis and Research (IPAR) in Rwanda, Kenya Institute for Public Policy Research and Analysis (KIPPRA) and Research on Poverty Alleviation (REPOA) in Tanzania to launch the Green Economy Coalition – East Africa Hub (GEC-EA).

The GEC-EA, hosted by ACODE, is an extension of the globalized Green Economy Coalition (GEC), which has been formed to establish a sub-regional knowledge and action space that connects green economy and natural capital agendas across the three East African member countries.

The executive director of ACODE, Dr. Arthur Bainomugisha, in an interview with Earthfinds at the launch, explained that the Coalition is going to help countries put in place legal, policy and institutional frameworks that will help them transition to a green economy.

He explained that by green economy, they mean a fair, inclusive economy – one that caters for the future. “When we say green economy, we mean economies which understand that the planet has limits and can revolt because of climate change problems. And that revolt can manifest or is manifesting in a draught, bad rains (El Nino), shrinking rains and disappearing rivers like River Rwizi. In West Africa Lake Chad is disappearing” he said.

In the five years, GEC has been implemented in Uganda, Mr. Bainomugisha says there have been achievements recorded including the finance ministry greening the budget and practising natural capital accounting. Because of GEC efforts, parliament passed the climate change law among other regulatory regimes they are putting in place to facilitate the green economy transition. The government now has bought it, he said, revealing that now policymakers believe that climate change is real. Uganda cannot do it alone hence the necessity to bring on board the neighbours.

According to presentations made by representatives from Rwanda and Kenya, governments there are making progress – they have over the years put in place policies and frameworks that will make the transition to a green economy much easier.

Mr. Joseph Kagabo of IPAR says things like the banning of plastic carriers, planting of trees, the establishment of the green fund and greening of politics are good strides made by the Gen. Paul Kagame-led country which has in the recent years entertained great admiration for its economic successes.

In Kenya, Mr. Joshua Laichena from KIPPRA underscored the transitional progress being registered there considering that the country is 80% semi-arid and the nation’s Vision 2030 captures and is working on some of these areas of interest. We have good laws, what we need is to implement them, Mr. Laichena stated in a streamed presentation at the launch.

There Is Need For Targeted Reforms

Mr. Ronald Kaggwa who works with National Planning Authority in Uganda as Manager for Production, Trade & Tourism Planning noted that a macroeconomic way of doing things is fundamental if you are going to achieve the green economy goals. Also, Mr. Kaggwa notes that there should be reform to put in place healthy fiscal and monetary policies.

He adds that there should be deliberate intentions for both government and the private sector to invest in sectors like agriculture with high green growth.

The country programmes director, Green Economy Coalition, Mr. Stuart Worsley encouraged member organizations to engage each other, experiment and learn what works and what doesn’t work. “Get citizens to act; if citizens are with you, no one can stop you,” he said.

The Green Economy Coalition is the world’s largest movement committed to accelerating the global transition to green and fair economies. And with the launch of the GEC-EA, Local Green Enterprises (LGE) in the three East African member states join 53 other countries across the globe.