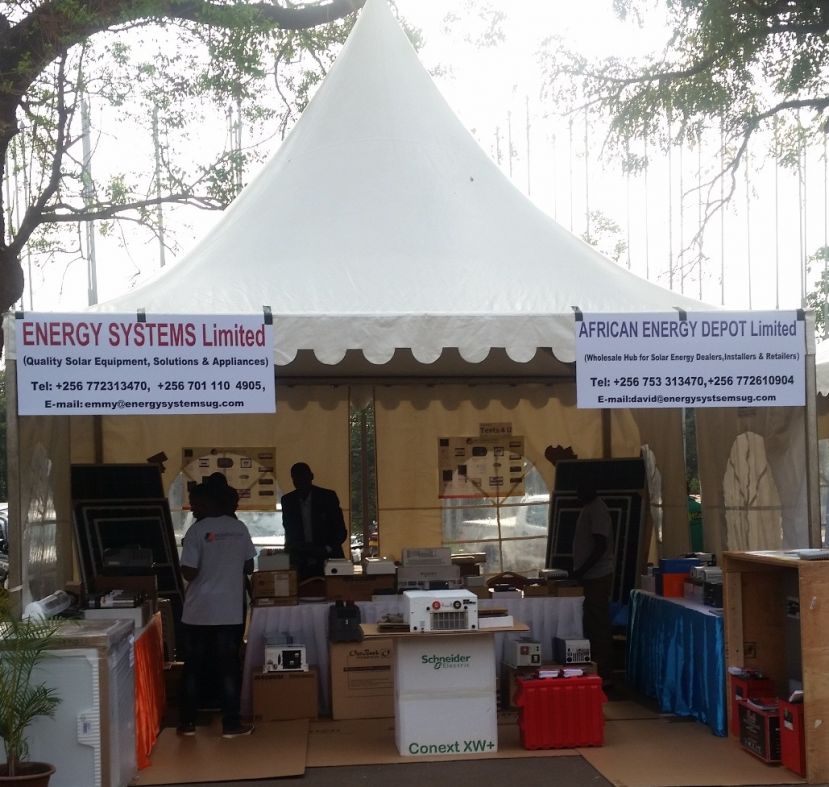 COURTESY PHOTO Some of the exhibitors at the off grid solar exhibition that took place at the Serena Kampala Hotel, February 6, 2018

More than 40 local and international solar companies showcased solutions for lighting off-grid homes, businesses, and public buildings, watching TV without having grid power, irrigating for greater harvests, and much more, at the side event, held alongside the Africa Energy Forum.

This exhibition, according to Emmy Kimbowa, the Chairman of USEA; Uganda’s apex membership body for solar system companies, demonstrated the opportunity that solar systems present for the economic growth and transformation of Uganda.

While electricity generation capacity in Uganda currently is 870 MW and peak demand is 550 MW, approximately, demand is increasing at an average of ten percent each year. Electricity shortfalls are expected until more power generation facilities are brought online.

Further, as the bulk of grid electricity is generated through large hydropower (approximately 85%), the reliability of Uganda’ power supply is susceptible to drought, intermittent rainfall, and reduced river flow – all factors that are expected to become more acute with climate change.

The Government of Uganda is meeting this challenge head-on by targeting an increase in installed capacity to 2,500 MW by 2020. Furthermore, Uganda aims to achieve a more diversified energy mix by making greater use of other renewable sources including medium and small-scale hydropower, biomass, solar, and geothermal.

Power Africa Uganda Electricity Supply Accelerator (PAUESA), is a project that was launched at the exhibition, by the U.S. Ambassador to Uganda Deborah R. Malac and Honorable Irene Muloni, Minister of Energy and Mineral Development in the company of the UK High Commissioner Peter West.

Also referred to as The Accelerator, PAUESA is aligned both with Uganda’s objectives and the Power Africa Roadmap goal of increasing regional generation capacity by 30,000 MW and increasing connections by 60 million.

With a population of about 34 million people, Uganda has one of the world’s lowest electrification rates even though Uganda has experienced an average economic growth rate of five percent per annum over the last ten years. In urban areas, while 55 percent of Ugandans have access to electricity, in rural areas, however, the electrification rate drops to 10 percent.

Only 5% (five percent) of the population is connected to the national grid, indicating that many of those who do have access to electricity are employing off-grid technologies such as distributed power and solar home systems to meet their energy needs.

Power Africa is a U.S. Government-led initiative launched in 2013 to expand electricity access and generation capacity in sub-Saharan Africa by adding more than 30,000 megawatts and 60 million new home and business connections.

Energy Africa, a UK Government-led initiative has been working closely with other development partners and the Government of Uganda to support the growth of the off-grid solar market through the establishment of a suitable enabling environment.