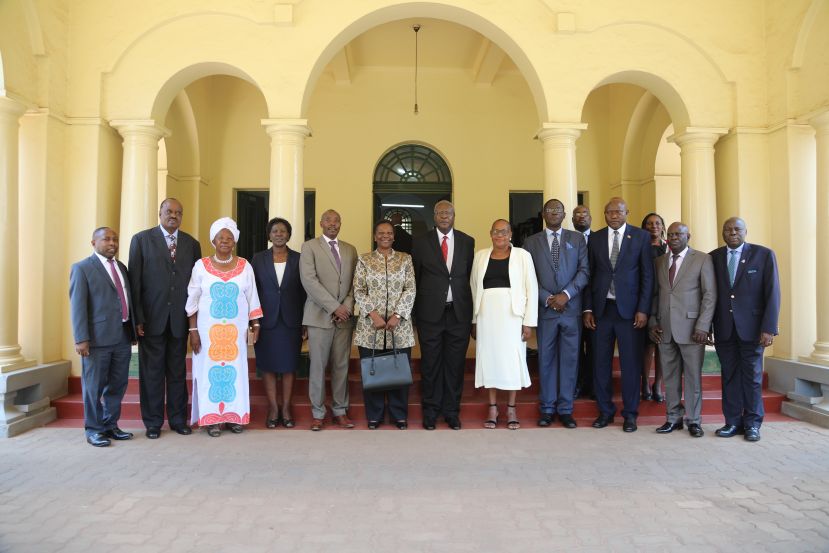 Group Picture Of the EDT Members, Minister and Chief Justice at the High Court

The Electricity Disputes Tribunal (EDT) has been fully constituted by government with as seven-member Tribunal to hear and determine electricity related complaints.

The tribunal led by Charles Okoth Owor as chairman, and Mr. Anaclet Turyakira as his vice was established by the Electricity Act in 1999 after the liberalistion of the power sector and been operating with only three members since 2006.

Following the death of one of the members, Eng. Moses Musaazi in 2018, the Tribunal has lacked the requisite quorum of three members, to effectively and efficiently carry out its statutory mandate.

Eng. Irene Muloni, the Minister of Energy and Mineral Development on Thursday 15th August 2019, presented the five new and additional members before the Chief Justice, Hon. Justice Bart katureebe to take oath before embarking on their new appointments.

Chief Justice Bart Katureebe welcomed the move to have a fully constituted EDT insisting that a growing economy generates a myriad of business disputes, which may require such specialized tribunals.

“To facilitate a fast, and efficient resolution of industry related disputes, we need such tribunals. Unresolved disputes lead to long delays in growth as business comes to a standstill awaiting justice”, said Justice Katureeba.

Justice Katureeba added that about 3-4 trillion shillings is tied up in the commercial court due to unresolved disputes. He said such Tribunals are needed in the entire country not only to speed up justice but to also facilitate business and growth.

Mr. Charles Okoth Owor, the chairperson EDT said the demise of their colleague in 2018 had negatively impacted the ability of the Tribunal to function.

“We are pleased to have new members to the tribunal. The EDT can now resume work on the backlog of complaints that have accumulated overtime since we lost our colleague Eng. Dr Musaazi”, said Okoth Owor.

The EDT is mandated to hear and determine all electricity related disputes that are referred to it except criminal cases. The EDT has all powers of the High Court in the exercise of its jurisdiction.