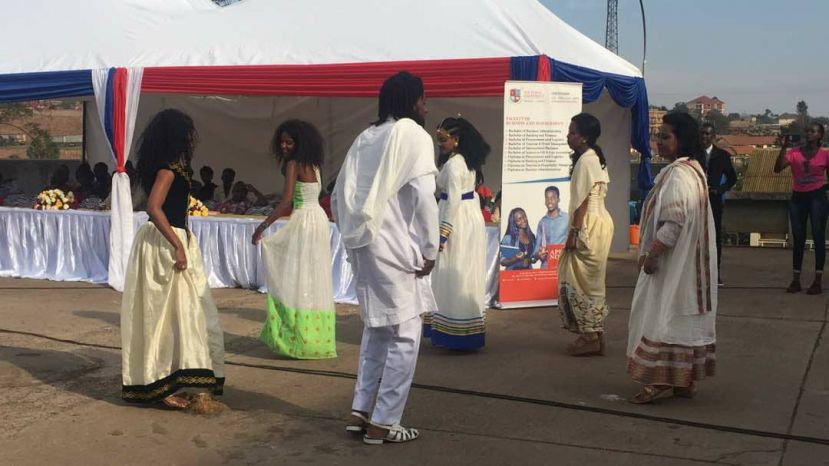 The day long competitive culture showcase, the judges said, looked at attires - how much the team played around with the details of their attire, food - how they presented their cultural food, why they choose that particular type of food, attachment they have on the presented dishes, cultural relations with the food and aroma, and dance - how the dances communicated, entertained and meaning of the dance routine.

At end of the day, Eritrea had won the the category of attire, followed by Nigeria and DR Congo who tied in second position. Eritrea also emerged top of the food category followed by DR Congo and Somalia. Alberta Horlu, who was the only student representing Ghana won the dancing competition with a solo dance act.

The Eritrean male students wore a kidan habesha (ije tebab) while the females wore the zuria to win the culture attire category.

In the food category they prepared a tiqrinia ethnic foods which included the shiro, tebsi, ades, ziqnia, himbasha and derho all served with injera. They also prepared areki (an alcoholic drink), sewa (a traditional drink) and performed a coffee ceremony.

Ghana’s Horlu, a female student, performed three traditional dances from Accra, Volta region and southern Ghana. The dances, she said, are performed for kings, during marriage ceremonies and other traditional events.

Uganda despite being hosts walked away empty handed. Burundi who combined with Rwanda were energetic and were recommended by judges for mobilizing well for the event.

Somalia and South Sudan had plenty of dishes to showcase and either of them could easily have been winners in the food category had it not been for Eritrea’s better organizational skills.

The dances brought out well the agenda of the event - diversity. Each performance was wooing. DRC performed a musical dance depicting a marriage ceremony, so did the somalis, eritrean and Ghana,

Each student who made a presentation about their country candidly spoke and marketed their country. The University Vice Chancellor Dr. Krishna N. Sharma thanked students for showcasing their nations in the right light.