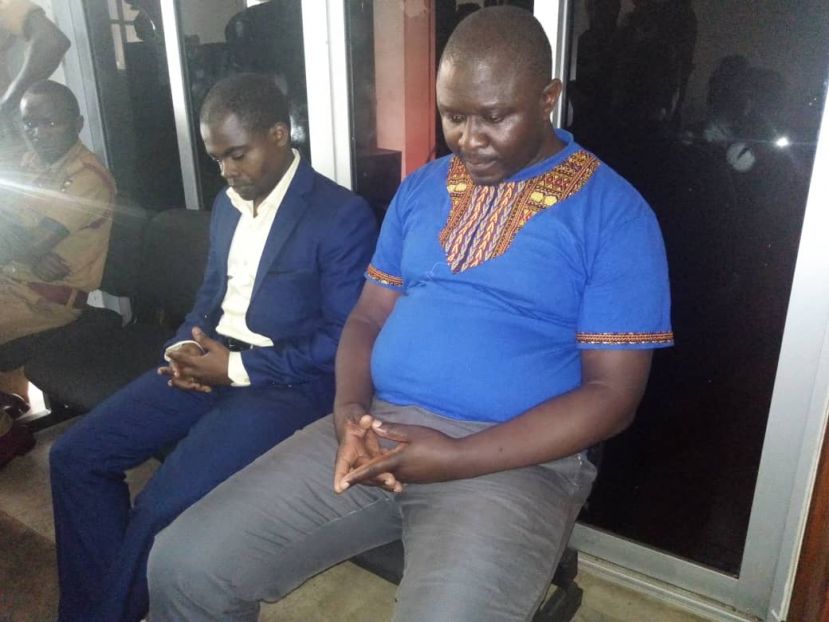 The two Bank of Uganda officials

Those that were presented before the Anti-Corruption Court are Francis Kaketo and Fred Vito Wanyama who are facing charges of Abuse of office and corruption as an alternative count allegedly committed on April 26, 2019 between France, Belgium and Entebbe international Airport.

The two being Branch manager and Assistant branch manager respectively and while on assignment by their employer (BoU) to carry out a pre-shipment inspection of printed material in France, allowed inclusion of unauthorized cargo on a chartered plane by BoU.

The duo in the alternative court are said to have failed to refute and report inclusion of unauthorized cargo on a plane chartered by BoU. The charges have been sanctioned by Director of Public Prosecution himself Mike Chibita

Yesterday three more government officials were arrested by CID and other agencies investigating the alleged printing of Shs90 billion even though the governor of Bank of Uganda (BoU) insists no extra money was printed.

The latest arrests come as investigators led by the Uganda police detectives continue to hunt for individuals involved in causing the saga that saw private goods and parcels carried on a chartered plane used by BoU to deliver its consignment in April.

The chartered plane landed at Entebbe International Airport on April 27 and was cleared by Uganda Revenue Authority (URA) customs department in the presence of BoU officials, BoU security, aviation security, police and other security agencies. However, it was reported that instead of the expected 20 pallets, the consignment had 25 pallets.

On Wednesday, the investigators arrested three Bank of Uganda (BoU) officials for of abuse of office and neglect of duty. The officials are Caroline Nankabirwa, from procurement department, Simon Peter Zaribugire from currency department and Milton Opio, director security.

Investigators from the Uganda police say investigation into the Bank of Uganda continue and will soon issue a new statement on the latest developments concerning the currency consignment saga in which a chartered plane delivered five crates alongside 20 pallets of BoU consignment.

“Our officers in partnership with other agencies are still doing the investigations and I promise we will soon issue a statement to clear rumours in the media,” an officer who is part of the team said on condition of anonymity as he is not allowed to talk to the media.

The officer said the investigations spearheaded by CID Director Grace Akullo have expanded countrywide to BoU regional currency centres of Kabale, Mbale and Fort Portal, after leads brought those centres into picture.

The detective explained that heads of BoU currency centres in the three regions are being interrogated on whether they had prior knowledge on the five extra pallets that were transported on the chartered plane, which had on board, newly printed Uganda Shilling notes.

The source said the CID team is also probing how and why the directors were transferred to regional currency centres from the head office in Kampala, prior to the arrival of the BoU consignment.

Sources indicated that the head of Mbale currency centre who was abruptly called to witness the offloading of BoU consignment became suspicious of the extra pallets and briefed BoU Governor Prof. Emmanuel Tumusiime-Mutebile.