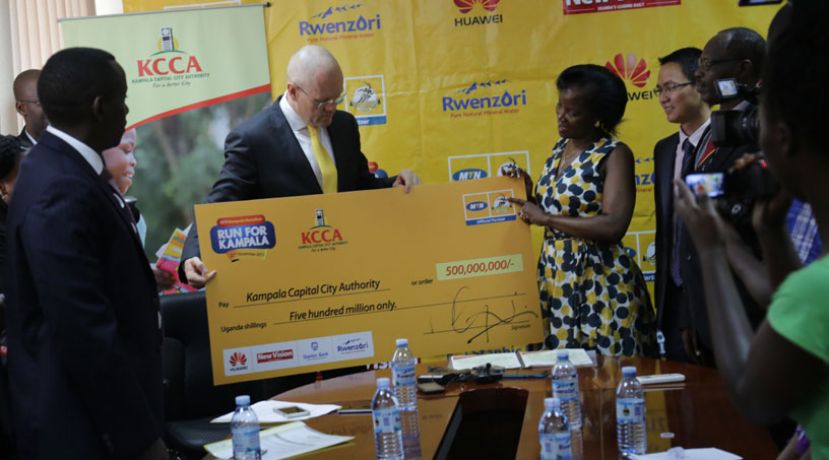 The Executive Director of KCCA Jennifer Musisi said most schools use firewood to prepare meals for pupils which makes it expensive to run these schools. The biogas which will be tapped from toilets constructed using funds from the Marathon will be used in school’s kitchen and for lighting.

The telecom company delivered Shs500 million collected from the Marathon, conducted under the theme “Run for Kampala” and attracted close to 20,000 participants, to KCCA towards the development of the city’s schools bio-toilet facilities at their head office Thursday morning.

Kampala has 79 government grant-aided primary schools with a total enrolment of close to 70, 000 pupils under the jurisdiction of KCCA. The average pupil – toilet stance ratio stands at 50:1, an improvement from an average ratio of over 80:1 from when KCCA took over.

Musisi said some schools still have a high toilet stance – pupil’s ratio. Police children schools have a ratio of 111:1. This challenge is also made worse by the lack of piped water. Schools that lack piped water depend on wells.

The MTN Uganda Chief Executive Officer Brian Gouldie said KCCA was selected in its capacity as the administrator of the earmarked city schools around the five divisions of Kampala. Gouldie added that the money raised will also go towards improving access to sustainable sanitation and safe water for the vulnerable urban communities especially children.