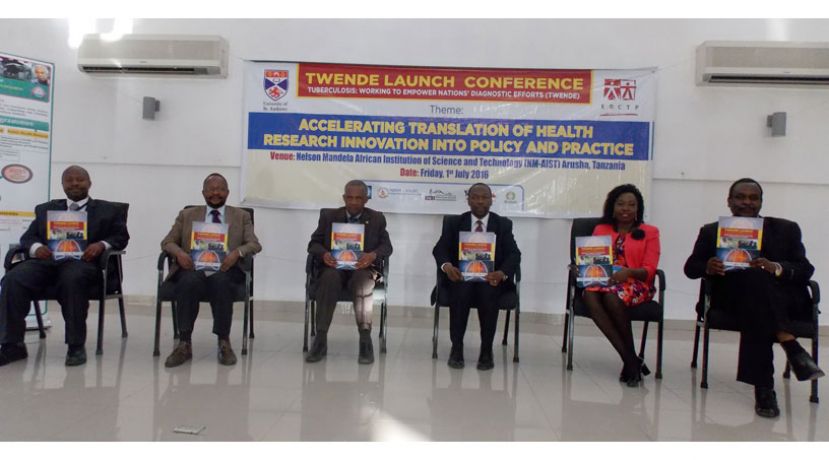 COURTESY PHOTO Top researchers at the launch of TWENDE Project in Arusha. Also, push for me in UGO as well.

Over 200 researchers, policy makers and doctors met at the Nelson Mandela African Institution of Science and Technology in Arusha to deliberate on the challenges the EA countries faced in diagnosing and treating of tuberculosis (TB).

The meeting also kicked off an initiative to fight tuberculosis out of Tanzania, Kenya and Uganda last Friday. TB affects over 60% of people with HIV/Aids and it is one of the diseases that most disturbs diabetes patients.

The three East African countries are among the 22 TB high burden countries in the world and this project taps into the regional expertise of East African researchers, practitioners and policy makers to deal with the disease.

However, before TB can be defeated, participants called upon concerted efforts to help reduce poverty in the region. Prof Gibson Sammy Kibiki, the head of the East African Community Health and Research Commission said, "If we want to fight poverty in the real sense, we have to fight diseases."

The project codenamed Tuberculosis: Working to Empower Nations Diagnostic Efforts (TWENDE), aims at coming up with the regional roadmap to facilitate the eradication of TB within the World Health organization target of 2035.

"When we bring together our expertise, we can translate our research into policy and practice," said Dr Nyanda Elias Ntinginya, the Principal investigator for TWENDE in Tanzania while underscoring the need to fight TB at regional level.

"TB knows no borders", Dr Nyanda said at the press conference earlier on Friday morning, highlighting the fact that East Africans are now mobile and therefore move with the disease.

Participants called upon governments of East Africa to pay attention to poverty as it is a key driving factor in the spread of TB.

"TB is a disease of poverty, overcrowding and malnutrition," said Dr Ewan Chirnside from the University of St Andrews in U.K. which is the lead institution in the TWENDE consortium.

Prof Christopher Garimoi Orach from Makerere University added that poverty leads to TB through malnutrition and lack of access to medical care due to financial difficulties. He called upon governments to invest in communities that are prone to TB by offering them social security.

TWENDE will be focusing on innovations in diagnostics as a way of preventing TB, early detection and treatment.

Dr Okwera highlighted the bad alliance between HIV, AIDS and TB, as a deadly combination for victims.

"You cannot deal with TB effectively without dealing with HIV," added Dr Wilber Sabiiti, the lead researcher for TWENDE.

More in this category: « Jumia Becomes One Stop Online Destination In Africa Mount Elgon: Exploring The Giant Of The East »