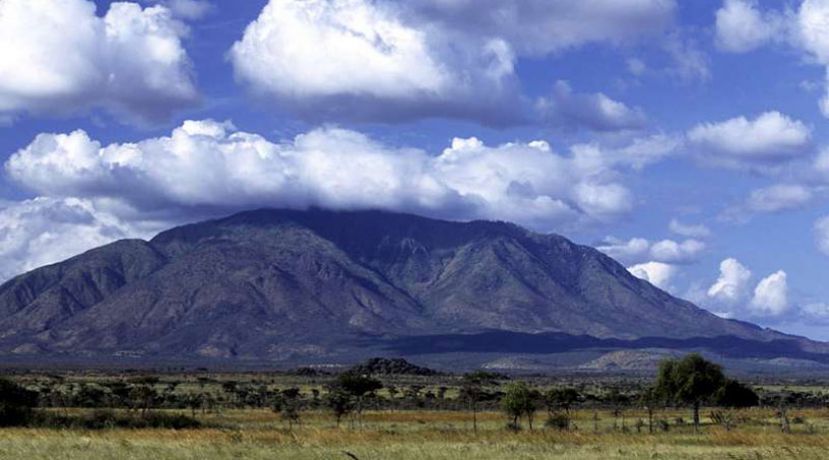 As you approach Mbale district in the East of Uganda, you will see across in the distance a looming dark object covered by mist or scattered clouds. The object magnifies when you get to Mbale, standing in all its glory as a guardian angel watching over the quaint town and its people.

Mount Elgon or Masaba, has one of the world’s largest intact caldera and with an estimated elevation of 10,070 ft above sea level, the highest known peak is called Wagagai. The extinct volcano is estimated to be over 24 million years old and sits on the border between Uganda and Kenya, with the largest portion being found in the former.

The Uganda Wildlife Authority page explains that Mount Elgon was built up from lava debris that blew out from an enlarged volcanic vent during the pliocene epoch or system of rocks deposited. The mountain’s geological formation is dominated by basaltic materials and is a number of weathered granite at the basement complex.

It is reported that carbonatite intrusions on the lower slopes after causing fenitization of the granites, rendered them sensitive to the instability on the slopes. The climate around Mount Elgon can be classified as generally rainy, with the occasional months of sunny weather through the year.

Mount Elgon is one of the oldest physical features in Uganda and is home to over four tribes including those from Kenya. However in Uganda, it is most known for being the home of the Bagisu, a bantu tribe that occupies most of the slopes of the mountain.

The slopes of Mountain Elgon have fertile soils that have been used to grow some of the best coffee in the world, Arabica. The slopes are also conducive for yams, cassava, bananas, beans and maize among other perennial foods that can be easily sustained in the area by the farmers.

The mountain is also home to the Mount Elgon National Park that is managed by the Uganda Wildlife Authority for the government of Uganda. The park covers stretches over into Kenya and is home to different animals including the red-tailed monkeys, elephants and buffalos which can mostly be seen at the slopes of the mountains.

Within the park you will find over 300 species of birds that migrate through the region, including those native to the country; some of the birds are said to be endangered species. A list that any ardent birdwatcher would not pass up on.

Though not well known in the country, the Mount Elgon National Park is open all year round and has been attracting several hikers trying their luck at scaling their way to the Wagagai summit. The region has so much tourism potential for the country; you can explore several caves on the hiking trail such as the crystalline walled Kitum cave and enjoy the beautiful views at the Endebess escarpment, which includes several of the rivers in the region (River Manafwa, Kufu) and the gorges.

There are forest walks organised by the Uganda Wildlife officials to show visitors some of the different species of vegetation in the forests which include bamboo trees, mahogany, eucalyptus, pine scattered through the park and the slopes of the mountain.

Apart from the thick vegetation being home to the birds and small animals, it is home to different rare species of butterflies that can be viewed in the area during the walks.

One of the most beautiful views from the mountain are the falls; Sipi, Simu and Sisi falls that cascade from the rocks and create a   of water and light. Located in Kapchwora, the Sipi falls are the most visited in the area and are worthy adding on your tour itinerary when exploring the Elgon.

The areas around the mountain are slowed down by the poor road development that could easily improve on the traffic and few good travel lodges as compared to Western Uganda that has many lodges in the parks.

Alot more effort needs to be put on promoting the tourism potential of Eastern Uganda for the region to become a budding tourist hub; the same way the West is promoted. This will help improve returns on tourism in the country.

Even so, the areas below the slopes such as Mbale have good accommodation such as hotels, lodges and hostels that travellers can stay in to prepare and rest up after they have had a wonderful day up at the mountain.

This article was written Jumia Travel

Travel.jumia.com is Africa's No.1 hotel booking website, allowing you to get the best prices for more than 25,000 hotels in Africa and more than 200,000 hotels around the world. Our ambition is to bring every bit of available accommodation online, and to create the easiest and cheapest way for customers to book it.

More in this category: « East Africa Starts Fight Against Tuberculosis Cakes Are As Important As Food Is »