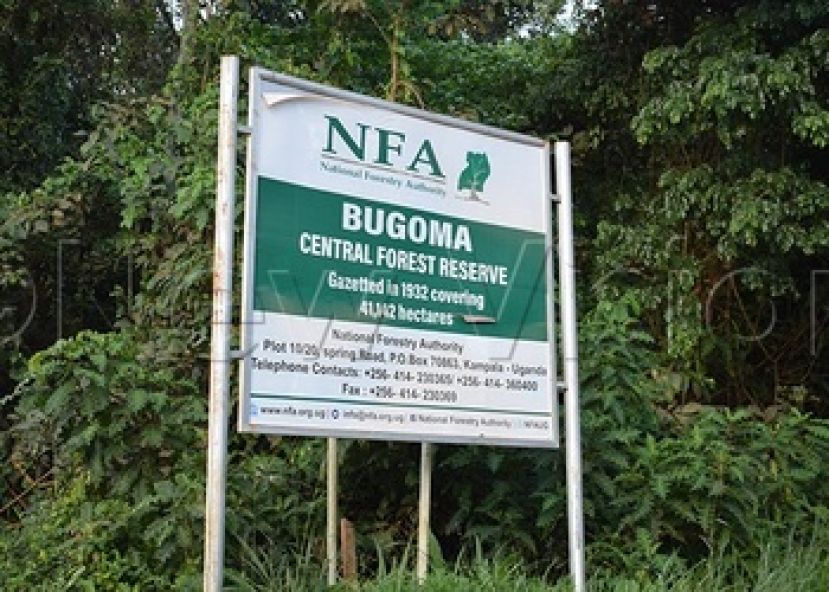 It was reported in media that the National Environment Management Authority (NEMA) issued a certificate of approval that allows the destruction of 21.5 square miles of Bugoma Central Forest Reserve in the midwestern region for sugarcane growing.

The issuance of the NEMA certificate to the sugarcane company came amid protests from the National Forestry Authority (NFA) who’s case is still pending before the court of appeal and the environmental activities who are fighting for the protection of biodiversity.

The Bugoma Central Forest Reserve, which covers 41,144 hectares, is the largest remaining block of natural tropical rainforest along the Albertine Rift Valley. The forest lies between Budongo forest and Semliki, thereby playing an enormous role in preserving wildlife migratory corridors.

It is also home to about 500 chimpanzees, which is 10% of the Ugandan chimpanzee population, making the forest a chimpanzee sanctuary. In addition, among other primates, Bugoma hosts a population of Ugandan mangabeys, which are endemic to this forest and are therefore a unique treasure.

Further, over 221 bird species have been recorded in Bugoma forest. Bugoma forest is also the single-most important tourist destination, outside the known national parks and wildlife reserves.

And with an ever-growing deforestation rate in Uganda that caused the loss of 63% of forested cover in only three decades, the life of the people in Bunyoro and in Uganda at large is more and more endangered. As forests are degraded or cut down, animal habitats are destroyed, resulting in increased human-wildlife conflicts.

In addition, water resources reduce as forests play an important role in water provisioning; this increases water stress. Further, soil fertility reduces, thereby affecting agriculture on which over 60% of Uganda’s population solely depend to meet their household needs.

In addition, conversion of Bugoma forest into a sugarcane plantation or any other land use that does not promote conservation undermines the implementation of the Sustainable Development Goals (SDGs) and international conventions such as the Convention on Biological Diversity (CBD), the United Nations Framework Convention on Climate Change (UNFCCC) and United Nations Convention to Combat Desertification (UNCCD) among others which Uganda has ratified.

It will also undermine Uganda’s commitment to reduce greenhouse gases through commitments made under Reduction of Emissions from Deforestation and Forest Degradation (REDD+) and as well as the country’s commitments under the Paris Climate Change Agreement.

Finally, since 1986, the Government of Uganda has pursued a policy of economic recovery and poverty reduction whilst observing sustainable management of the environment and natural resources. Currently, forest and environmental conservation is an integral component of the National Development Plan (NDP) III and the Uganda Green Growth Development Strategy.

This is due to the role forests and the environment at large play in supporting Uganda’s major economic activities such as agriculture, tourism and others. Therefore, destroying Bugoma forests that at the expense of sugarcane growing should be avoided for the wellbeing of the people in Bunyoro and Ugandans at large. It is paramount that the existing Bugoma Forest central reserve is protected and conserved.

More in this category: « Land Acquisition For Oil And Gas Projects: Project Affected Persons Will Be Adequately Compensated Bugoma Forest Reserve Is Falling At An Alarming Rate »