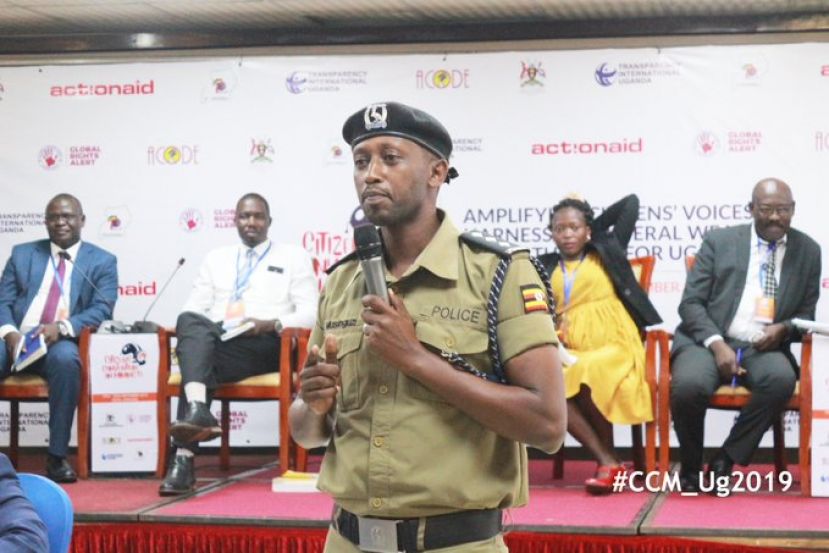 Artisanal and Small Scale Miners (ASMs) across the country are having a hard time working with the Police Mineral Protection Unit because police officers have turned to criminal acts instead of sanitizing the mining trade.

Miners from western Uganda districts of Buhweju, Kisoro and Busia in eastern Uganda on Thursday told the 3rd Annual Citizens’ Convention on Mining at Hotel Africana in Kampala that some police officers have made it a habit to disrupt their operations.

Officers of the Police Mineral Protection Unit formed in 2017 to deter illegal mining and crime in the minerals sector has according to accusations made by miners involved themselves in mining activities, aided illegal mining or extorted money from miners.

Nabulindo Jane Kwoba, the Woman Member of Parliament for Busia District, speaking at the citizen convention convened by Global Rights Alerts and partners said police has been joined by soldiers of Uganda People’s Defense Forces (UPDF) to chase miners from their land.

“They never listen to anybody. They are chasing my people from their land,” the politician told the convention.

An ASMs leader from Kisoro revealed that police officers are working with foreigners in Kisoro to mine wolfram at the expense of local artisanal miners.

Similar complaints were raised by gold miners in Buhweju districts where the Police Mineral Protection Unit is said to have periodically arrested miners and disrupted meetings of miners with civil society organizations.

The heated accusations put the commandant of the Police Mineral Protection Unit ASP Moses Musinguzi Karakire in a tight spot and to bravely defend the unit in face of irate miners who have suffered at the hand of the unit.

Musinguzi who denied his unit ever engaging in dubious deals advised miners to report the implicated officers to the Uganda Police Professional Standards Unit so that the culprits are apprehended and punished.

“When such mistakes happen, blame the individual but not the institution. We have to work with all people because we are a people police,” said Musinguzi.

“Some people are using equipment that is not expected to be used by a holder of a particular license. Where police go and find a crime being committed, he or she has to stop it,” added Musinguzi.

Responding to the issue of disrupting meetings in Buhweju, Musinguzi said they had gone to the area to sensitize miners but instead the miners ran away from police.

"We went to Buhweju to sensitize and give information on both TV and Radio but when people heard that we were coming, we found they had disserted the mines but we still looked for them and sensitized them," Musinguzi explained.

Asked why police sometimes act parallel and unresponsive to the ministry of energy and mineral development, Vincent Kedi, the principal engineer for mining at the department of geological survey and mines, acknowledged that there is a disconnection between the two and challenges in reporting to authorities.

Earlier, the minister for minerals Peter Lokeris had reiterated government’s commitment to help ASMs by putting in place an enabling environment for ASM operations and ensure that both our local people and the country at large, derive the most optimal benefits from mining.

“The government of Uganda recognizes the potential that ASM can contribute to the local economic development if well regulated. ASM can play a significant role in providing employment especially in rural areas, improving the livelihood of people directly or indirectly and controlling rural to urban migration,” Lokeris said in his address.

More in this category: « Chamber Makes Demands Ahead Of Mining Conference Miners Hoping EITI Will Be Good For Business, Promote Transparency »