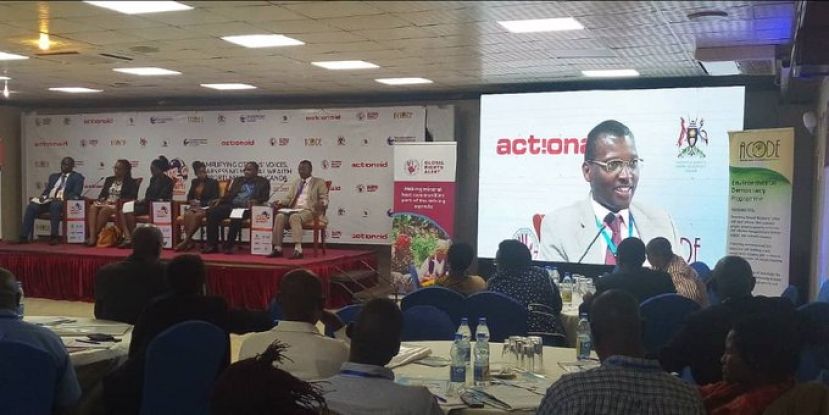 Uganda’s pursuit of becoming a member of the Extractive Industries Transparency Initiative (EITI) took shape with the formation of the Multi Stakeholder Group (MSG) to expedite the application process.

The pending arrival of EITI has caused excitement in the country’s mining sector which is predominantly artisanal, rudimentary and has been characterized by lack of transparency and accountability especially in instances where the government has entered into big money contracts with foreign mining companies.

Saul Ongaria, a senior economist at MOFPED, recently speaking at the Citizens Convention on Mining organized by Global Rights Alert (GRA) and partners at Hotel Africana, revealed that Uganda’s application to become a member of EITI will be submitted before the end of this year.

Uganda becoming a member of EITI comes with a number of benefits top of which is the need to promote transparency, good governance and accountability in the sector by both miners and government who must declare details of contracts, transactions and taxes exchanged and how they are used to develop the country.

Ongaria told miners and stakeholders at the convention that joining EITI will help Uganda improve her investment climate for miners, generate more revenue for the government, minimize revenue mismanagement, improve the licensing process which has been contentious and provide a platform for sharing of factual sector information.

He said the government is committed to achieving this and is benchmarking with countries that are currently implementing and practising these EITI standards.

“Government has put in place laws and policies to facilitate this process,” he said referring to the Public Information Management Act, the Access to Information Act, the National Oil and Gas Policy, the Mining and Minerals Policy and others.

“We are going to make sure that the law works in harmony with extractives processes. We need it (EITI). It is a standard that will help us track the sector. EITI requires cooperation between CSOs, companies and government to agree on the way forward and flag whatever gaps are in the sector and also offer recommendations,” Ongaria explained.

While Ongaria painted a picture of commitment, the chairperson local council five Mubende district Kibuuka Francis Bazigatirawo Amooti tasked government to fast track registration of miners in the country so that they can participate in the EITI implementation.

“The promise has always been there – applying – when will this applying stop? Does it require the signature of the Pope in Rome?” Kibuuka, who re-echoed the opinions of many artisanal miners at the convention, wondered.

The convention, which attracted close to 400 stakeholders in the Ugandan mining sector, heard from Ian Mwiinga, the national coordinator of EITI Zambia, that artisanal miners through their associations must participate in the EITI application and implementing processes.

“Make sure you have a stake, no one should block you,” he encouraged the miners who were in attendance, explaining that Uganda’s focus should be what EITI will do for the country but not what Uganda will do for EITI.

In agreement, Ongaria acknowledged that it is challenging to solve issues without involving the affected people, in this case, the artisanal miners. “We want ASMs to be part of the MSG. There are issues you can raise and we pick them up. We are going to ask you to nominate representatives to MSG,” Ongaria noted.

James Muhindo of Advocates Coalition for Development and Environment (ACODE) stated that ASMs will be obligated to participate and adhere to the standards of EITI once Uganda signs to it.

“It will be an obligation for ASMs to declare what they are producing once they are in the system. Whatever the companies declare, they will also have to declare. It will be their responsibilities to declare.”

EITI, implemented in over 50 countries, especially in Africa because the continent is rich with natural resources, faces implementation challenges like lack of good laws and willingness by both government and miners to go all the way in implementing it.

Paul Bagabo of Natural Resource Governance Institute noted that that ASMs are largely challenged by lack of capacity and because of that gap the government prefers to work with big companies. He asked ASMs to start coming together and work towards becoming one big company.

He advised Uganda to focus on the implementation of EITI and combat corruption in the extractives by protecting civic space.

The annual Citizens Convention on Mining was held under the theme amplifying citizens’ voices, harnessing mineral wealth opportunities for Uganda with support from ACODE, Actionaid International, Transparency International and Ministry of Energy and Mineral Development.