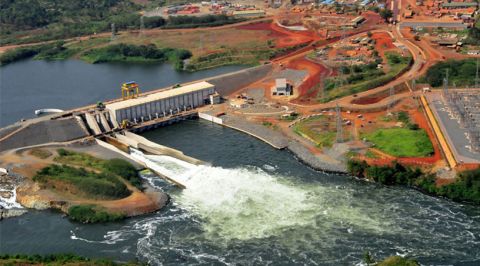 Norwegian Hydropower Company SN Power is set to buy into Bujagali Hydropower Project, a new report released this week has indicated. The state owned Norwegian firm has agreed with SG Bujagali Holdings (SGBH) from Mauritius on the sale of the latter’s partial interest in Bujagali.

Bujagali is a 250 MW hydropower facility located in Jinja, Uganda.  It was developed, financed and will continue to be operated by Bujagali Energy Limited (BEL), which is owned by affiliates of the Aga Khan Fund for Economic Development (AKFED), SGBH and government of Uganda.

The affiliates of AKFED and GOU will retain their interests in Bujagali.  The project’s debt financing arrangement with its lenders, including development finance institutions such as the African Development Bank, World Bank Group and European Investment Bank, will not be affected by the transaction.

The acquisition will provide a platform for SN Power to develop additional hydropower projects in Uganda and Sub-Saharan Africa.

Thomas DeLeo, Director, SGBH revealed that SGBH has owned its interest in the Bujagali project in Uganda for eleven years, through initial development, construction and full operation. He said they are extremely proud of the contribution the project has made catalyzing transformation of the country’s power sector.

“Uganda has incredible potential, and we have seen myriad ways in which Ugandan businesses and consumers have benefited from reliable electricity since Bujagali came online.  Now that we have completed our goal of proving Bujagali’s operational strength with operations above a 99% contractual availability over the past 3 ½ years, SN Power will be the ideal partner to continue this legacy for Uganda, given its world-class operating capabilities, global portfolio, financial strength, and proven commitment to the highest social and environmental standards.“

Torger Lien, Chief Executive Officer, SN Power explained that they look forward to a strong and enduring partnership with the Government of Uganda, as well as the operating and lending partners of Bujagali Energy Limited, in contributing to the critically important goals of materially enhancing Uganda’s installed generation capacity and providing a greater share of Ugandans with access to electricity.

“With consistent power, businesses can grow, agricultural producers can prolong the shelf-life of their products, hospitals and clinics can better provide for their patients, and schools can keep the lights on for a new generation of students.  SN Power is seeking a long-term investment in Uganda that will sustain Bujagali’s transformational, positive impact.”

The Bujagali Hydropower Project is widely considered the most successful public private partnership in the power sector in Sub-Saharan Africa and has been used as a model for subsequent projects in the region.  Bujagali was commissioned in August 2012, putting an end to years of constrained economic growth caused by an insufficient and unreliable power supply in Uganda.

The project sponsors, led by IPS an affiliate of AKFED, were selected in April 2005 through an international competitive tender overseen by the GOU based on the lowest return on equity.  At the end of the concession, Bujagali will be transferred to the GOU for one US dollar with an expected remaining life of 70+ years.

SN Power, which is owned by Statkraft and Norfund, is one of the world’s leading international hydropower firms.  With Statkraft, SN Power has a strong industrial foundation built on more than 120 years of developing, owning and operating hydropower projects in Norway and abroad.

Statkraft is wholly owned by the Norwegian state and is the largest renewable energy and hydropower company in Europe, with a total installed capacity of more than 18,000 MW.  Statkraft’s gross sales amounted to USD 8.7 billion in 2014.

Norfund is a Norwegian development financial institution, which invests in private enterprises in Africa, Asia and Latin America.  Through Norfund, SN Power has access to significant experience and expertise in conducting investments in emerging markets, particularly in Uganda and Eastern Africa.  SN Power’s investment in Uganda will complement the company’s commitment to building sustainable hydropower in Africa, building on prior investments in Zambia’s Mulungushi and Lunsemfwa Power Stations.

SGBH, a company incorporated and doing business in Mauritius, is one of the original shareholders of BEL and an affiliate of Sithe Global Power, LLC (“Sithe Global”), an international power development company. 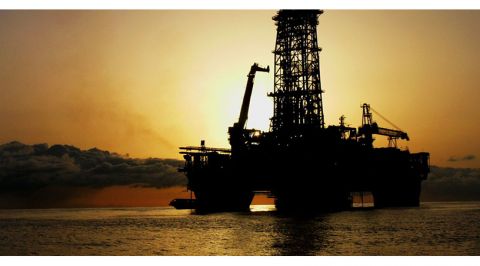 Uganda will host stakeholders in the oil and gas industry from different parts of Africa at a high level National Petroleum Data Management for Africa workshop. The four day workshop will be held at Lake Victoria Serena Resort - Kampala, Uganda, starting on Monday, April 11, 2016 at 9:00 AM until Thursday, April 14, 2016 at 4:00 PM (EAT).

The meeting is being organised by Norway, under the Oil for Development (OfD) Programme which is currently active in 8 countries in Africa including; Angola, Ghana, Kenya, Mozambique, South Sudan, Sudan, Tanzania and Uganda. It will focus on managing national petroleum data.

The Oil for Development (OfD) Programme offers assistance to developing countries in their effort to manage petroleum resources in a sustainable manner. Through the OfD Programme, Norway shares its experience from more than four decades of managing oil and gas resources.

The programme is different from country to country but there are also similarities due to common issues in all countries on development of petroleum resources. One of the important areas that all countries share, is management of the national petroleum data.

The various countries are in different development phases, but many of the challenges can be related. Against this background, experience from one country is relevant to other countries. This workshop, therefore provides a unique opportunity to learn from the experiences of other countries in Africa and to share challenges and achievements.

In various countries, the Norwegian Petroleum Directorate (NPD) are working on various programs including petroleum data management. The workshop will benefit from their participation by tying the experiences from one country to another.

Since 2006, Norway has supported Uganda through Norad’s “Oil for Development” initiative. In this cooperation, Uganda and Norway have focused on the establishment of competent institutions within the Ministry of Energy and Mineral Development, with capacity to handle the challenges in the exploration phase and early upstream phase. 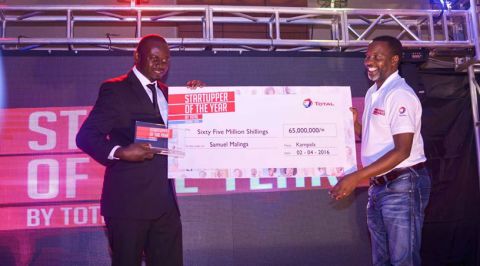 The Startupper of the Year by Total challenge came to a plausible end when Ushs130m was awarded to the top three contestants as seed capital to kick-start and fund their business ideas.

The challenge is part of Total Uganda and Total Group’s initiative to promote socioeconomic development in Uganda and on the African continent, bringing to life the brand’s thematic “energizing life”.

The prize money was handed over to the winners at the Startupper of the Year by Total awards gala which recently was held at the Sheraton Kampala Hotel. The ceremony followed a four -month search for the most innovative and entrepreneurial business ideas by Total Uganda and Total E&P. The competition kicked off on November 03, 2015 and ended on March 12, 2016.

Total Uganda’s Managing Director, Mr Florentine de Loppinot said, the competition received over 190 entries from Uganda alone and out of these, 10 competitive participants were chosen by a jury of ten. The 10 participants presented their projects to the jury on March 12th 2016 after a week-long boot camp at Garuga Beach Resort Hotel.

On top of the cash prizes, the winners will get free coaching from Total Uganda on how best they can improve their projects for better results and resource utilization among other things. The seven finalists who didn’t make it to the top three were also awarded with different prizes. The top ten also got certificates of merit.

The overall winner of the Startupper of the Year by Total challenge Samuel Malinga is the founder of Sanitation Africa. Malinga holds a bachelor’s degree in Agricultural Engineering. He has been working on the Sanitation Africa project for the last two years.

Malinga’s Sanitation Africa sells latrines at $450 for one stance and $720 for two stances, with a 30% profit margin. For pit emptying, a customer is charged $9 per 250 liter drum of sludge extracted and most households normally pay for 6 drums comfortably. Some Individuals, schools, NGOs are already paying for these services.

The pumping equipment is locally manufactured. According to Malinga, Briquettes are a substitute for coal imported. Pit emptying prevents overflows of sludge in pits during the rainy season and saves people from faecal sludge related diseases like diarrhea, cholera, among others

The company has five full-time employees and 24 part-time. Pumping teams are equipped with protective equipment and disinfection kits. Recruitment will follow the demand level. 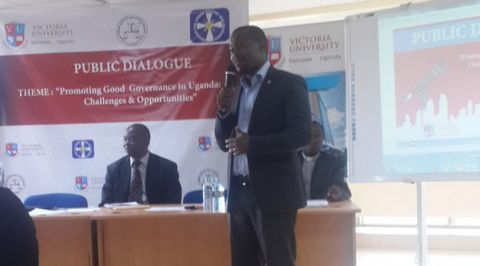 One of the characteristics of sustainable urban centers is that such settlements and development must be ecologically viable, Associate Professor Sabiiti Makara of Makerere University told a public dialogue at Victoria University in Kampala, Uganda on Thursday 7 April.

This means that urban planners and leaders must address ecosystem challenges when planning to develop urban centers like cities, municipals and towns. Sabiiti, a political science lecturer at Uganda’s biggest and leading university said that cities must be clean with no littering, green with open spaces and environmentally conscience.

A panel of experts discussed challenges and solutions to ensure good governance in urban centers.  Sabiiti revealed that at 5.1 percent annually, Uganda is one of the countries experiencing the world’s fastest urbanization trends.

The professor added in order for good governance to prevail, urban centers like cities must be economically productive, socially just, politically vibrant, culturally diverse and have own development capacity. He warned by that lack of political order causes problems and stalls urban development.

In Uganda urban centers due to poor planning and lack of good governance surfers every time it rains because of poorly built drainage systems. Due to pollution of the environment by unregulated industrialization, many people are getting deadly diseases.

Often times environmental issues are raised when for example city projects including infrastructure developments are being undertaken. The drive to save swamps and wetlands in Kampala has been ongoing but with less success as rich people and government erect structures in swamps. This destroys the ecosystem.

In a similar manner, Dr Kiggundu Amin Tamale working with Center for Urban Studies and Research advised that urban center managers should perform because they are hired and paid to think for what is good for towns. “As city managers, you need to think for your people but they are failing.” Tamale noted.

David Kasimbazi, the programs coordinator at Center for Urban Studies and Research said there is a disconnection between policies and what is on ground. Kasimbazi’s opinion is also reflected by calls to bring law and policy reforms to improve service delivery in urban centers across the country.

“Take an example of Kampala Capital City, the fighting between Lord Mayor Erias Lukwago and the Executive Director, Jennifer Musisi has cost us good service delivery for over four years. It is time we separate politics from City planning; development of towns and cities has been frustrated by politicians who claim to know it all,” Fr Kabura said.