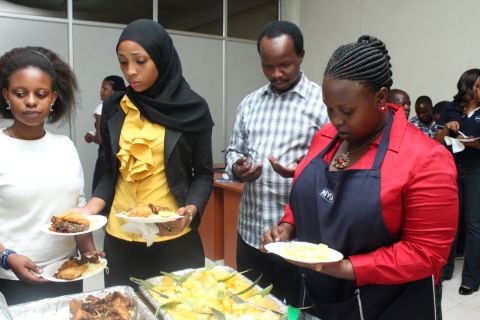 It was 6 years ago when the premises of a leading import and export company Equator International Distributors Limited at Tropical Complex Building off Kyagwe Road in the heart of Kampala were raided and closed with no proper documentation or legal instructions by a team purportedly from security, URA and UNBS.

The verbal baseless accusations they levelled against the company then the exclusive distributor of Nivea products in Uganda, Rwanda, Congo and other countries in the region were that they had expired goods in its warehouse which was never the case.

“These baseless accusations were no solid ground for locking up our warehouses and to date, neither Uganda Revenue Authority nor Uganda National Bureau of Standards have ever come out with any official statement to substantiate or deny those claims besides compensating the businessman Chris Mutinye whose warehouse they locked up illegally and merchandise was lost. Over 3 billion shillings worth of stock was lost as a result” Juuko a former employee emphasized.

This has left the 100 or so former employees the company had at the time across the country and beyond in a dire situation as many of them have never gotten proper employment or an alternative income since their jobs were cut short abruptly.

“Many of our colleagues have never gotten anything to do, some are doing casual work while others are in the villages painfully trying to rebuild their lives with hardly any success,” says Philemon Ssentamu the group’s leader and former Executive Assistant to Mutinye.

It is for this reason we demand the authorities to come out clearly and let us know the fate of the company besides giving our boss a fair hearing and compensation for the merchandise and money he lost in this mess, he adds.

By the year 2014 Chris Mutinye’s company Equator International Distributors Limited was one of the leading taxpayers in the small and medium remitting an average of about one billion shillings a month to government coffers with a network of sales points across East Africa for leading cosmetics brand Nivea plus other consumer products including non-alcoholic drink Pure Heaven plus other cosmetics.

As a result, a number of unscrupulous business’ people decided to join his line of trade importing fake Nivea products from China, India and the United Arab Emirates which did not go down well with the company owner who was importing his products legitimately with all the proper licensing.

When Mutinye engaged Interpol and local authorities to deal with these counterfeits effectively, a combination of ‘mafia’ within security, UNBS and URA instead turned on him in collusion with his bankers who have been in the media recently over a landmark case. The bank gave away his private bank and account details to his tormentors who used it to make his life hell on earth.

According to Philemon Ssentamu his Executive Assistant, Chris Mutinye was illegally detained by unknown security agents who kidnapped him for 6 months and robbed him of 16 billion shillings in cash and another 12 billion shillings in the bank through this time as they tortured him mercilessly forcing him to sign his money away.

Luckily for Mutinye, he did not lose his life during these 6 months of illegal detention but his life has never been the same as he is still dealing with the side effects of this incarceration and trying to regain his footing in the business having lost a fortune is this saga.

Information reaching us is that Mutinye also survived two-staged accidents which are suspected to have been plotted by the same people one at Shoprite Lugogo and another in Ntinda.

It is as a result of this that his former employees Led by Ssentamu are calling on the police, judiciary, labour department, the office of the President and other relevant authorities to expedite justice for Mutinye, compensate him so that he can re-open his business and enable them to earn a decent living urgently given his company was a significant employer in the country and contributor to the National treasury. 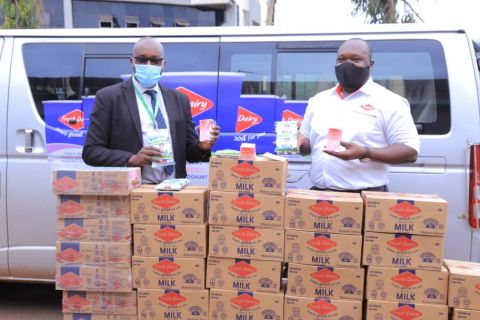 Fresh Dairy has today handed over approximately 264 litres of milk to the Dairy Development Authority (DDA) in aid of their clean milk handling and production campaign which is expected to attract over 400 dairy farmers from various organizations across Uganda.

Speaking during the handover ceremony, Director Technical Services Dairy Development Authority - Akankiza Samson said that the campaign is aimed at teaching farmers about clean milk handling and production which is vital for milk hygiene.

Akankiza commended Fresh Dairy on the partnership with DDA and mentioned that the milk from Fresh Dairy will aid in showcasing to farmers samples of pasteurized dairy products, which will in turn help minimize on the monotony of raw milk.

Akankiza explained that after the official launch in Central region, similar launches will be organized in Soroti, Gulu, Mbarara and Kiboga, focusing on areas that are easily accessible to farmers. Further still, as a way of demonstrating clean milk handling and production, Dairy Development Authority will hand over aluminum cans to farmers in those regions, to educate them on the recommended utensils for milk storage,’ he said.

Vincent Omoth - Marketing Manager Fresh Dairy said, ‘At Fresh Dairy, we currently work with over 30,000 small and large scale farmers. Being part of the Dairy Development Authority campaign reaching out to farmers on clean milk handling and production is a bonus for us because the campaign is further empowering farmers on best practice milk production.

This will ensure that the farmers will deliver clean good quality milk to our Milk Collection Centers, which in turn is used to make good quality Fresh Dairy products for the end consumers.

The EITI Board has approved Ecuador’s application to join the EITI, making it the 55th implementing country and the 11th in Latin America.

“EITI implementation can underpin the modernisation of Ecuador’s regulatory framework in the extractive sector, and help ensure that the development potential of extractive revenues is realised,” said EITI Board Chair Helen Clark.

“We welcome Ecuador as an implementing country and look forward to the EITI promoting transparency, accountability, and debate around the management of the country’s natural resource wealth.”

Transparency in a growing sector

Transparency is a fundamental element in the development of a robust extractive sector. Through a sustained approach to accountability, EITI implementation can help make information available to Ecuadorian citizens, and strengthen public understanding on how natural resources revenues are being managed.

Ecuador is one of Latin America’s most important oil exporters and has a growing mining sector. With an oil production of half a million barrels a day, Ecuador’s extractive industry can provide important revenues for infrastructure and development. Transparency and accountability are key to ensure the country’s resources are managed responsibly.

Yet the COVID-19 pandemic has imposed severe burdens on Ecuador’s public budget. Attracting investment will continue to be a priority for the government and will require it to demonstrate a high level of transparency.

The government committed to join the EITI in September 2019, noting that EITI implementation would help Ecuador in its pursuit of “transparency and efficiency in managing the natural resources of the country.”

Civil society organisations have campaigned for Ecuador to join the EITI since 2012. Their continuous engagement, as well as commitment from some of Ecuador’s largest extractive companies, have been instrumental in presenting Ecuador’s candidature application.

Ecuador’s multi-stakeholder group (MSG) – composed of government, industry and civil society representatives – has developed an ambitious Work Plan for the next three years. The engagement of all the stakeholders will be important to ensure that EITI implementation aligns to national priorities and contributes to inclusive development.

Ecuador’s first disclosures according to the 2019 EITI Standard will need to be made within 18 months of being admitted as an EITI implementing country. 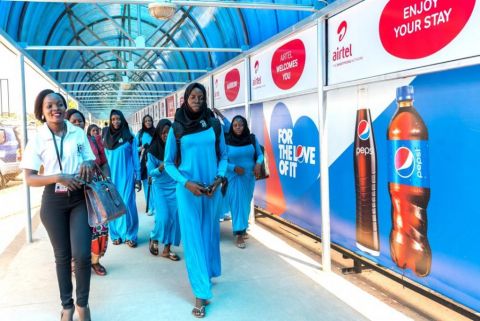 Uganda Association of External Recruitment Agencies (UAERA) has said that they will officially close business with immediate effect following the refusal by Ministry of Gender, Labour & Social Development (MGLSD) to lift the suspension of externalization labour.

On 20th March by MGLSD suspended the externalization labour including the clearance of Ugandans travelling abroad to work in an effort to curb the spread of coronavirus. But with the resumption of international passenger flights and the reopening of Entebbe Airport, MGLSD said they have received many clearance requests for migrant workers intending to return to their workplaces abroad.

“This should, of course, be subject to fulfilment of COVID-19 Standard Operating Procedures put in place by the government of Uganda and other authorities in the respective destination countries," MGLSD said in a public statement this week.

But even if clearance is given by the ministry of health and the National COVID-19 Taskforce, MGLSD said they prefer the reopening to be phased. "The first phase will start with a clearance of all categories of migrant workers other than domestic workers," MGLSD stated.

This has not gone down well with labour externalization companies whose main speciality is dealing in the domestic workers. Uganda Association of External Recruitment Agencies says that there are more than 165,000 Ugandans who are gainfully employed in the Middle East through the domestic workers' program.

The Association’s chairman Baker Akantambira in a press statement on Friday revealed that remittances from migrant workers in the Middle East alone into the country have grown to over $700m. In Uganda, 200 licensed labour externalizing companies have provided employment opportunities to over 4,000 Ugandans domestically.

The sector, Akantambira said, has been contributing huge None Tax Revenue to government agencies through the processing of passports, VISA fees (income to other countries, Interpol charges (98% of the Interpol Letters are from labour recruiting companies), bank charges and vaccination payments against yellow fever of Shs100,000 per person and now the recently introduced COVID-19 PCR Certificate fee.

But due to COVID-19, most of the licensed recruitment companies have closed shop, suspended operations due to rent, salary arrears and other operating costs in their places of operations after they spent the bigger part of the year without working and this has directly affected over 4,000 direct employees of these recruitment companies and their dependents.

Akantambira noted that there is also a growing concern within the sector that the prolonged closure of legal labour migration is fueling an increase in human trafficking as has been witnessed since the airport was opened on 1st October 2020.

Akantambira has also expressed concern that many a time the ministry takes sweeping decisions without engaging the respective labour companies directly or through their Association. The move, he says, by the ministry to unilaterally undertake measures directly affecting the labour companies is disturbing even though the suspension of externalization of labour was inevitable.

And for that matter, they have decided to suspend their operations until they reach an understanding with the ministry. The Association argues that the proposed phased reopening of the sector in the manner proposed is as good as extending the suspension.

"Moreover, in all this, neither the labour companies nor their leadership under the Association are being consulted," Akantambira said.