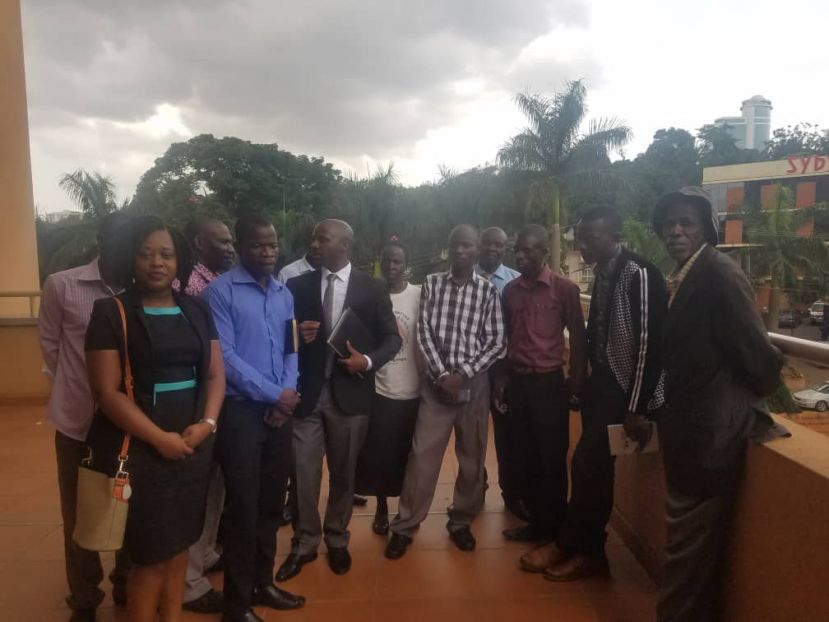 PAPs during case hearing at the Kampala High Court recently

The preparation for production of the country’s oil and gas has not been a bed of roses for some families in the albertine graben region – many have been left scared, hurting and homeless. Attempts to seek redress in courts of law have not provided a quick fix.

When government acquired over 29 sq. km of land for Uganda’s proposed refinery beginning in 2012, tens of homes had to give up their land, culture and way of life to allow the project take off. Government promised to compensate them sufficiently to restore them to their normal homely setting.

While government has done a great deal compensating the refinery project affected people, especially those who chose for cash compensation, some of the project affected persons (PAPs) who chose resettlement have not received their worth, many of them chose to go to court. And for a long time they have been praying that court serves them justice – just not yet though.

But if anything from their latest appearance at Kampala High Court, on March 4, 2019, where the matter is being heard by Lady Justice Cornelia Sabitti, their fate has a few months to be known. In an attempt to expedite the hearing, the judge has offered ‘to visit the refinery-affected people’s settlement in Kyakaboga, Hoima district in an attempt to understand the matter better.

The judge’s decision follows a submission of evidence by all the refinery-affected people, Africa Institute for Energy Governance (AFIEGO), the civil society organization helping the PAPs get justice said in a press statement

AFIEGO said the judge’s decision came after Mr. John Bosco Wandera, who is one of the plaintiffs in the case in which the refinery-affected people accuse government of under-compensating and delaying to compensate them, submitted his evidence.

During the case hearing that took place on March 4, 2019 at the Kampala High Court, Mr. Wandera told the judge that he had two pieces of land in the refinery area in Kabaale-Buseruka, Hoima prior to government’s land acquisition. When asked to leave, Mr. Wandera opted for physical relocation for one of his pieces of land and asked for cash compensation for the other.

Mr. Wandera told the judge that he was displeased with government’s decision to construct for the refinery-affected people houses in a camp-like settlement. “I was a member of the resettlement committee and in 2014, Ministry of Energy took us to Kyakaboga to see the land it said it wanted to buy.

The land was rejected by both the committee and the refinery-affected people because families wanted to be bought for land on a case-by-case basis as committed to by Ministry of Energy in the Resettlement Action Plan (RAP) report of 2012.

The committee and the refinery-affected people told Ministry of Energy that the camp-settlement in Kyakaboga would not allow people to engage in farming. It would also breed poor sanitation and result in tension with neighbours,” Mr. Wandera said.

Government constructed 46 houses for families who opted for resettlement to pave way for the proposed oil refinery in Kabaale parish, Buseruka sub-county, Hoima.

But the residents started leaving and constructed temporal houses in the neighboring village. Mr. Innocent Tumwebaze, the chairperson of the affected residents reported that over eight families had abandoned the newly constructed houses due to sanitation related issues.

Mr. Julius Ochokdhogu, a father of five children told Earthfinds last year that he decided to shift into a new home because of the limited house capacity to accommodate his family. He says the house requires high sanitation standards yet there is limited water access, no lights among other issues.

Mr. Geoffrey Komakech, the area district councilor who is also the district secretary for production and natural resources says they are to write to the energy ministry to seek for redress of the community concerns.

The uncontended PAPs continue to express displeasure over what government offer upto today. “Kyakaboga smells because 46 pit latrines, houses and kitchens are built in the squeezed settlement. The latrines are very close to the kitchen and the houses making the settlement unhygienic. I abandoned my house because of the situation in Kyakaboga,” Mr. Wandera told the judge early this month.

He also told court that his children had fallen sick because Kyakaboga is unhygienic. Mr. Wandera asked the judge to visit Kyakaboga and assess its situation. The judge said she could visit after hearing all the evidence.

During the case hearing, Mr. Wandera also informed the judge that because of the cut-off date of June 2, 2012, he was unable to re-build his house in Kabaale-Buseruka when it fell in 2014.  This is because the cut-off date stopped him and other refinery-affected families from undertaking developments on the affected land.

The judge made the decision to expedite the hearing because the refinery-affected people travel from Hoima, Kiryandongo and other districts to Kampala for every hearing of the case. This is expensive, time-consuming and cumbersome especially on women and the poor. The judge fixed the next hearings in June 2019.

More in this category: « Why Stakeholders Are Ecstatic About Uganda’s EITI Ambition NEMA Approves ESIA For Tilenga Project »