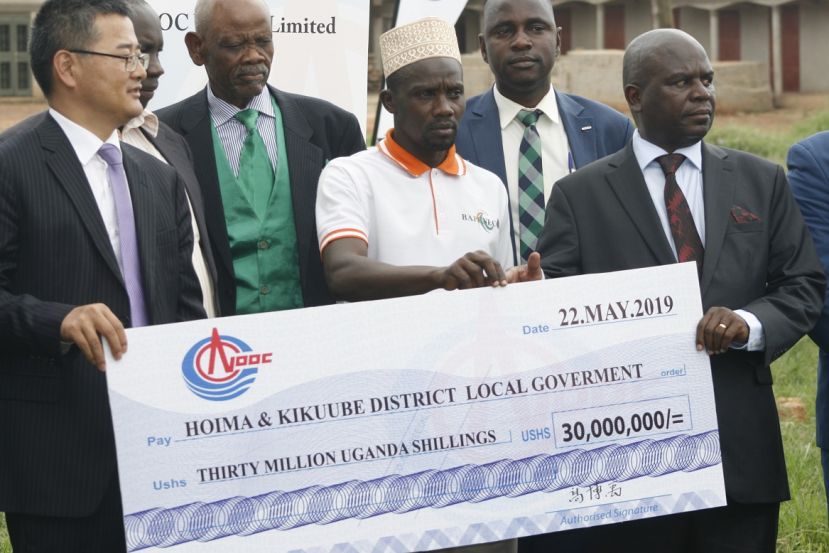 Speaking during the ceremony at Sir Titto Winyi playground in Kikuube district on Wednesday to recognize the best performers, Aminah Bukenya, the Public Relations Supervisor at CNOOC revealed that the programme was first started in 2012 with an aim of encouraging good performance among students in Hoima.

The beneficiaries received cash prizes and certificates. This was intended to inspire students in the district.

Bukenya explained that Hoima and Kikuube districts are currently experiencing rapid development and CNOOC Uganda believes that the youth are prepared. She elaborated that with a transformed education sector, residents shall benefit from the oil and gas industry in the Albertine grabben.

A total of Shs30m ($8,000) has been awarded to the 90 best performing students in the 2019 national examinations. The Hoima and Kikuube Districts education Officers Deogratias Byabagambi and Godfrey Seruwanja said 100% of the beneficiaries were selected from the two districts of Hoima and Kikuube.

Bukenya noted that the purpose of the best performers’ awards affirms CNOOC’s willingness to be good neighbors to the community in which they operate.

Gao Bou the development and Geology, Manager for CNOOC, said they are committed to continued cooperation with the local communities to improve education and other sectors as far as oil and gas is going on in the Region.

Kadiri Kirungi, the Hoima district chairman applauded CNOOC for supporting education in Hoima district and requested them to consider vocational training scholarships as a way of tackling unemployment challenges which is common among the age of young ones who needs a helping hand especially here in the oil region.

The State minister for Bunyoro Affairs Ernest Kiiza Apuuli who was the chief guest appreciated CNOOC for the support they are providing to Hoima and Kikuube districts education sector. He said the support is line with government’s Development programmes.

Kiiza urged the winners to continue working hard at their next level of education and always consider giving back to the community so that those who come after them can receive the same support. He also appreciated the teachers for emphasis they have taken through empowering these students to make them pass their examinations.

More in this category: « Buliisa Residents In Panic Over New Planned Relocations Conference To Show How Energy Will Generate Economic Growth »