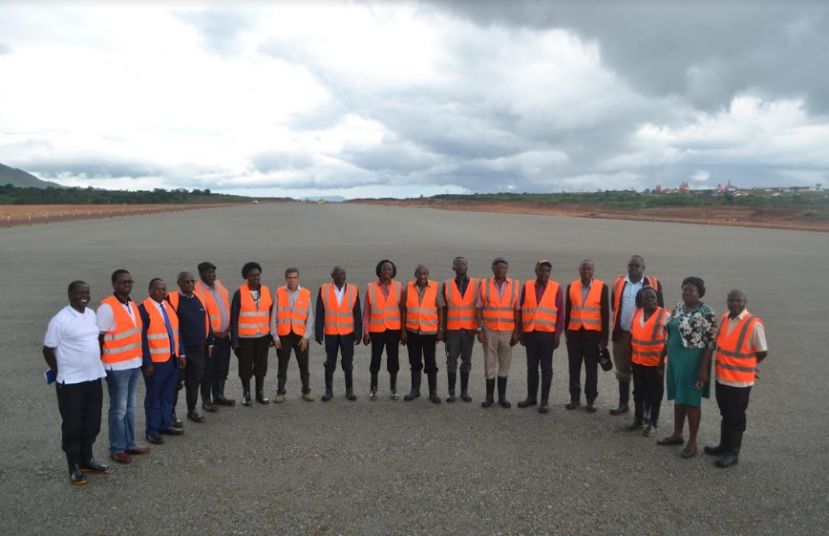 Ongoing construction works at Kabaale International Airport in Hoima now stands at 34 percent, Tahar Cheriff, the project’s resident engineer, has revealed. Cheriff also expects work to be completed on the 7th of Feb - 2023.

The project’s construction is funded by the United Kingdom Export Finance (UKEF) at a tune of Shs1.1 trillion (Euros 300m).

Cherrif also revealed that the contract for the company contracted to undertake the construction works, SBC, has been extended to 2023. The deputy director CAA, Eng Fred Bamwesigye said they have extended the completion of the airport to 2023 from 2021 due to unavoidable circumstances.

Cheriff said that earthworks for the runway, which involves digging up and compaction of soil are at 27 metres from the ground to ensure a completely firm foundation. Eng Bamwesigye recommended the progress of the works.

Ruth Apolot from Uganda Civil Aviation Authority says that the project involves the construction of a Code 4F Runway of 3.5 kilometers, a multi-purpose terminal building for cargo and passengers and a control tower.

Others will be an airfield ground lighting system, a fire station, car parking lot, access roads, taxiway, perimeter fence, and electrical center, among other facilities. She says after construction, Kabaale’s runway will be able to handle big and heavy aircraft.

Eng. Edward Kaweesi Ndawula, the CAA Board Chairperson who led board members on a field visit to the construction site on Tuesday, said they are impressed by the speed of the works, level of integrity and professionalism exhibited by the contractors.

Eng. Ronald Twesigye, an engineer from the Uganda Civil Aviation Authority, said that they are so impressed by the work done by the contractor as far as the construction of the airport is concerned.

Kabaale will be Uganda’s second international airport after Entebbe. It is also expected to facilitate the oil refinery, tourism, and agriculture in this region.