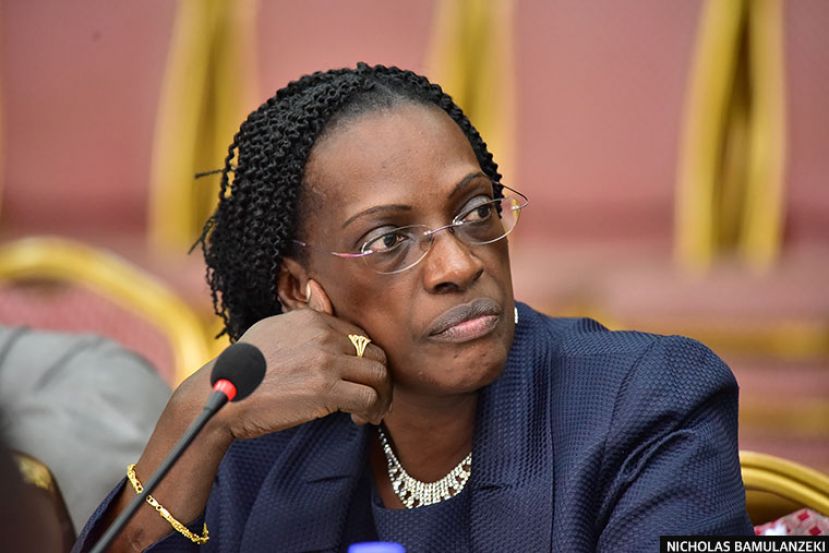 COURTESY PHOTO Justine Bagyenda is former executive director of Bank of Uganda in charge of supervision must be indicted, the petitioner says

The Anti- Corruption division of High Court in Kampala has been petitioned to indict and hold culpable 3 former executives of the Bank of Uganda, over allegations of involving themselves in corruption and the fraudulent sale of former Crane Bank to dfcu Bank.

This is in a petition filed by a concerned Ugandan Sam Brian Kakuru seeking the High Court to institute an investigation into the operations of Louis Kasekende, Justine Bagyenda and Benedict Ssekabira.

Bagyenda is former executive director of Bank of Uganda in charge of supervision also at the heart of dubiously selling banks, Louis Austin Kasekende was the former deputy governor Bank of Uganda while Sekabira was the director Capital markets in the Central bank.

Kakuru thus wants the court to question them and their intent to establish their role into the illegal sale of former Crane Bank valued at Shs1.3trillions and handed over to Dfcu at only 200bn, not in cash. Six other banks were also victims of the above individuals’ heinous dealings.

According to the petition, Kakuru wants the Anti-Corruption Court to base its investigations on the 2019 findings of the Committee on the Commission, State Authorities and Statutory Enterprises (COSASE) and the Auditor General’s Report, which implicated Kasekende, Bagyenda, Ssekabira and other officials at the Central bank in having had a hand in the dubious sale of Crane Bank and several other commercial banks.

He further wants President Yoweri Kaguta Museveni to use his prerogative power conferred upon him by the Constitution to invoke investigation and reprimand for the named former BoU officials, because of their involvement in a litany of corruption activities, with intent to amass obscene wealth.

“The former Bank of Uganda (BoU) officials conspired with the mysterious Nile River Acquisition Company as the Company bought off secured debts of International Credit Bank (ICB), Greenland Bank and Cooperative Bank at Shs8.89 billion representing a 26 per cent discount of the total secured loans.

“The loan portfolio sold included secured loans of Shs34.5 billion which had a valid, legal or equitable mortgage on the real property and were supported with legal documentation. I noted that the contract price of Shs8.878 billion represented 26% of the total secured loan and 7 percent of the total loan portfolio implying that the loans were sold at a discount.” The Auditor Genera; John Muwanga say in his special audit report of BoU on defunct banks (Annex 3).”

Kakuru adds in his petition that “The Financial Institutions Act (FIA) provides ways in which the Bank of Uganda may take over and resolve the financial institution that is in distress. BoU fraudulently closed Crane Bank ignoring sections 89 (1), (2) (e) and (9) of the FIA Act (Annex 1).”

“Corruption implicated former BoU official fraudulently closed Central Bank without conduction of an evaluation of the assets and liabilities of Crane Bank before they were transferred to Dfcu Bank.

He also adds that “BoU was deliberately involved in obstruction of justice to Chairman Ruparelia Group through misappropriation of taxpayers’ money to hire MAAKS Advocates that created a scenario of allegedly taking Shs397 billion out of the financial institution in alleged fraudulent transactions and land title transfers. MAKKS Advocates had been previously hired as lawyers for Ruparelia Group, a case that was crashed in court as a conflict of interest (Annex3).”

“The ACD of the High Court must investigate and prosecute former BoU corruption implicated officials the circumstances that led to the closure of Cooperative Bank after unearthed questions regarding the particular identity of the bank that was closed, after two groups of shareholders came up claiming ownership of the bank, with each sharing the same names. (Annex 1).

Greenland Bank equity investment in African Export-import Bank (Egypt) worth USD45,000 had accumulated dividends of USD22,410 as at 30th November 2015, however, the liquidator (BOU) had not sold off the shares and therefore the funds were embezzled by the corruption implicated former BoU officials (Annex 1).

The Petitioner wants Bank of Uganda Governor Emmanuel Tumusiime Mutebile who was requested by COSASE to prepare a response to the demand for Shs20 billion from the Central Bank by businessman Chris Tushabe Karobwa.

Mr Karobwa petitioned Parliament faulting former BoU officials for bringing his business empire down after officials mismanaged properties worth Shs1.4Billions which he had mortgaged in Cooperative Bank before it was closed and liquidated in 1999.

He also claims that Shs3Billion that was on his account in Cooperative Bank at the time of closure was stolen on top of BoU seizing and grounding his two Mercedes Benz lorries.”

More in this category: « Kampala Landlords Demand For Tax Waivers, Tax Holiday MP Katuntu To BoU: You Will Lose To Sudhir In Supreme Court »