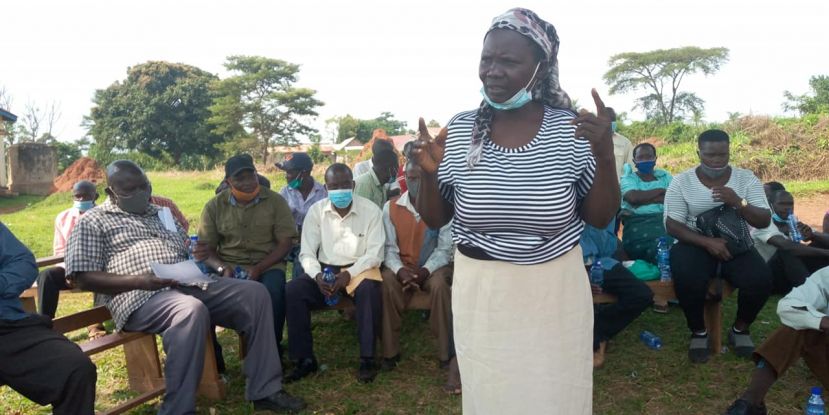 Oil companies led by French oil giant Total SA are continuing with plans to build a $3.5 billion East African Crude Oil Pipeline EACOP. On the 13th Uganda and Tanzania signed a deal to undertake the 1,445km oil pipeline, just two days after the government had signed a host government agreement with Total.

A flurry of oil and gas discoveries along Uganda’s western border has lured dozens of investors seeking to develop sub-Saharan Africa’s largest oil discovery in decades. However, renewed interest in the once-neglected Lake Albertine rift basin is also creating new problems—tilting the region's energy needs towards fossil fuels, channelled through the world’s longest heated pipeline which campaigners say is a big threat to the environment.

In Mubende district, farmer Vicky Najjemba looks over her coffee plantation and house. After getting a solar power connection to her 3 bedroom house two years ago, Ms. Najjemba, a single mother planned to raise her 4 children here. She now fears that she may be forced to relocate with her family, even though her long-promised compensation is yet to arrive.

“It’s very disappointing,” said the 37-year old mother. “This is my ancestral land, the future looks so uncertain”

Ms. Najemba is among the 12,000 families being evicted to pave way for the project. She expressed frustration at being told not to undertake any further activities on the land.  Ms. Najjemba who struggles to feed her family will also likely lose her coffee farm, a situation she says risks pushing her deeper into poverty. Many residents along the 900-mile pipeline route have similar stories.

Last year, a cut-off date was placed on the pipeline affected people’s property, which meant that people cannot utilise their land for long term investments such as growing of perennial crops, setting up of houses and others. Affected people perceive this action as an abuse of their economic, cultural and social rights.

Sande Amanya, one of the affected people, also a resident of Mubende vows not to abandon his home and banana plantation unless he is fully compensated.

“We were stopped from cultivating our fields within the pipeline path, it’s now 2 years and we have not received any payment, yet we are not able to fully utilize our land,” he says.

A recent report by Oxfam on the Human rights impact assessment of the oil pipeline titled ‘Empty promises down the line’ among other findings concluded that the EACOP would worsen communities economic opportunities by limiting the use of their land and destroying the wetlands and forests they depend on for livelihoods. The report among other recommendation urges EACOP developers and government to ensure valuation and compensation processes are just, transparent and aligned with international best practices.

A group of at least 30 international and local campaign groups say that the pipeline, which will cross vast marshland and rivers, poses unacceptable risks to water and biodiversity.

It will cross Lake Victoria, one of the world’s largest freshwater lakes, where an oil spill could prove disastrous for over 30 million people that rely on the lake’s watershed for drinking water and food production.

“Although Uganda has relatively low historical greenhouse gas emissions, for many reasons, no new fossil fuel project is justifiable,” said Deborah Ramalope, Head of climate policy at Climate Analytics a non-profit science and policy institute based in Germany. “Investments in fossil fuel have a high risk of locking in emissions for many years”.

A local natural resources officer of Mubende district, Vincent Kinene, fears that the project will interrupt access across villages because crisscrossing the pipeline route is not possible.

“Outside the long-promised jobs and hyped local transformation, there will likely be a spike in land and access related conflicts,” he says.

According to Kinene, the quoted mitigations in the Environmental and Social Impact report are generic and not locality specific. The lack of thoroughness at that stage is an indicator of spills to come.

While the government claims that oil developments will increase energy supply and lower the overall cost of power generation in Uganda, environmentalists are concerned about the colossal impact of oil developments on the environment. They say that since Uganda has a huge capacity of potential renewable energy that can be readily tapped into. So why turn to non-renewable fossil fuels?

“Government’s insistence on developing oil resources is coming at the expense of providing clean, affordable and reliable energy options such as off-grid solar”, says Dickens Kamugisha the executive director at Africa Institute for Energy Governance, a local Non-Governmental Organisation spearheading the campaign to stop the project.

Instead of investing resources in off-grid energy options which have the potential to meet the energy needs of the poorest, the government is spending money investing in oil, which will not guarantee access to clean, affordable and reliable power.

Uganda meets more than 93% of its energy demand with biomass in form of charcoal and firewood, 6% with fossil fuel combustion and only 1% with electricity from hydro and fossil-fuelled thermal power plants, according to statistics from the Ministry of Energy. The country currently imports all its petroleum-product requirements.

Only about 15% of the population has access to electricity, and in rural areas, it’s only 7%. The majority of the population continues to rely on wood fuel and charcoal. This has resulted in the depletion of the country’s forests and woodlands, and related health hazards.

Some activists believe that the pipeline project is not the best option for the country given its current development status. “Uganda should rather look for opportunities to diversify its economy by investing in clean energy projects which have the potential to  generate multiple sustainable development benefits”, says Ramalope

Uganda’s energy sector has experienced an over-emphasis on Hydropower and petroleum as the most important energy assets overlooking other potential sources. This development path experts say is being driven by an appetite for large portfolio infrastructure projects that offer political mileage.

In 2006, Uganda confirmed the existence of commercially viable quantities of oil in the Albertine basin. Oil reserve estimates remain at 6 billion barrels. Oil companies finalized the exploration phase and are now preparing to undertake the development phase, which will subsequently lead to production in 2023. The output is expected to peak at 220,000 barrels-a-day of crude, Uganda consumes around 15,000barrels-a-day of crude, the remainder will be exported.

Robert Magori, Africa Communications Manager at 350.org, says environmentalists consider the pipeline a “disastrous project” because of the threat it poses to the environment, society and the associated economic risks.

“The international scientific community is telling us that the world cannot absorb any new fossil fuel developments if we are to tackle the climate crisis,” he says.

The emissions from burning the oil transported through the pipeline alone are estimated at 33 million tonnes of CO2 per year, according to 350.org.

Uganda is richly endowed with renewable energy resources for clean energy production and the provision of energy services which are fairly distributed throughout the country.

Uganda is a signatory to the Paris agreement the country has committed to a 22% emission cut on a business as the usual basis by 2030 in a bid to mitigate and adapt to climate change and transit to a low-carbon climate-resilient economy.

“Government should promote investment in more sustainable energy options as opposed to rushing to commence oil projects which endanger our environment and people,” says Kamugisha. “Uganda has plenty of low-carbon energy options.”

Diana Taremwa is a freelance Journalist writing on the Extractives sector.

This story was written as part of the Sustainable Energy for All fellowship by Climate Tracker and Hivos.