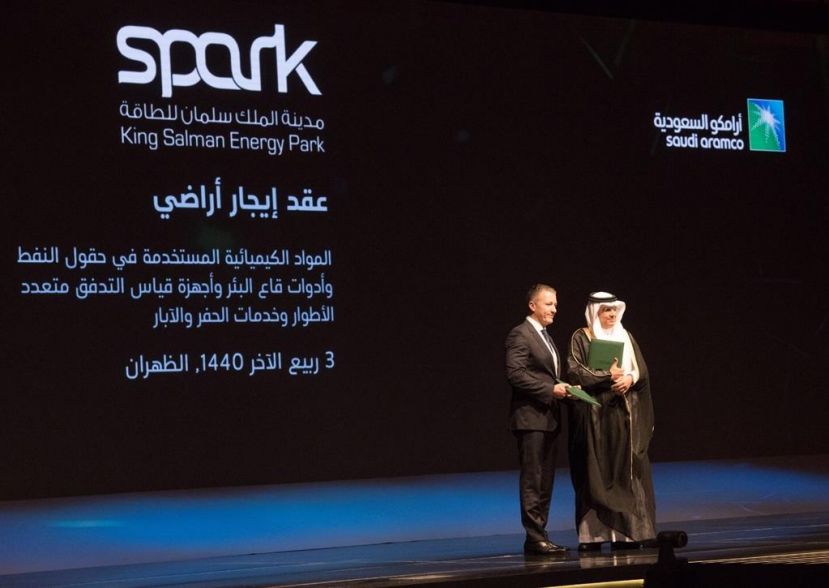 SPARK is a 50-square-kilometer energy city megaproject, which will position Saudi Arabia as a global energy, industrial and technology hub. Saudi Aramco will develop, operate, manage and maintain the project's infrastructure in partnership with the Saudi Authority for Industrial Cities and Technology Zones (MODON).

SPARK's role in enabling localization within the Kingdom's energy supply chain aligns with the strategic goals of Saudi Aramco's In-Kingdom Total Value Add (IKTVA) program and affirms the Kingdom's commitment to Vision 2030 by serving as an economic catalyst and advancing Saudi Arabia's strong position in the global energy sector.

When operational, SPARK is estimated to contribute more than $6 billion to the Kingdom's GDP annually and create up to 100,000 direct and indirect jobs.

Dr. Mohammed Y. Al-Qahtani, Senior Vice President for Upstream, Saudi Aramco stated, ''SPARK will emerge as a key enabler for Saudi Aramco's In-Kingdom Total Value Add Program (IKTVA) which has a mission to raise local content to 70% by 2021. Presently, the Kingdom's requirement for energy-related industries is growing and requires dedicated industrial development focused on the energy sector and SPARK will provide for the development of a world-class energy industry hub to support the same.''

Dr. Qahtani added, ''We're looking forward to collaborating with NESR, one of our first anchor partners at SPARK, and are very encouraged to see NESR take a leading role in developing the energy infrastructure of the Kingdom and the larger region at such an early stage of its journey.''

Sherif Foda, Chairman of the Board and CEO of NESR stated, ''We are very honored to be given the opportunity by Saudi Aramco to be part of this endeavor at its inception. NESR has considerable experience in local manufacturing and indigenizing the supply chain which is already being implemented in the Kingdom.

This new facility shall be NESR's flagship operating facility in the Kingdom and will host all our product lines as well as that of our technical partners. I would like to thank Saudi Aramco for reposing their faith in NESR and as a local company, we are very proud of our contributions to the Kingdom's energy industry and look forward to amplifying our efforts in this regard.''

More in this category: « Chinese Energy Conglomerate Convicted of International Bribery Reshaping Of Oil Markets Has Only Started »