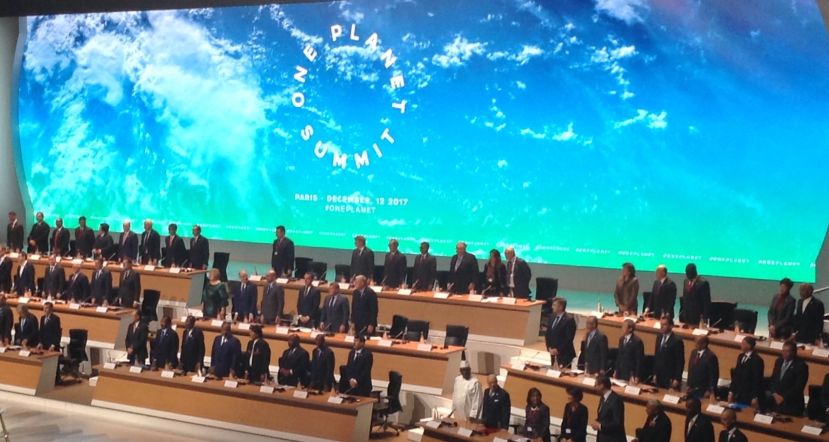 Africa is responsible for only four per cent of global greenhouse gas emissions, but 65 per cent of its population is thought to be directly affected by climate change. So, in Nairobi, the One Planet Summit will illustrate the core truth at the heart of the climate change debate: global warming has an impact on everyone on the planet, whether or not they contribute substantially to it.

The OPS Nairobi Summit will showcase Africa’s strengths as a vibrant place for climate innovation and investments with advances in sustainable business models, climate smart agriculture, green bonds, and renewable energy Confirmed by French Republic President Macron, « We have all the means to act to fight against climate change. But one country or one business alone can’t save everyone.

That’s why we need the international meetings and coalitions to coordinate our efforts and strike hard. We need to act now to achieve our main goal: reduce our production of carbon which destabilizes the climate balance and causes impacts on our security and health. The next months will be full of opportunities to strengthen our joint effort and to create new partnerships”.

This is a response to Africa’s disproportionate burden as the result of climate change, the complex shifts that affect our planet’s weather and climate systems. Climate change encompasses not only rising average temperatures but also extreme weather events, rising seas, and shifting wildlife populations and habitats.

Africa’s vast ecological wealth and unique natural ecosystems are especially susceptible, which is why Kenya’s President Uhuru Kenyatta will launch a call to action at the Summit “to prevent, halt and reverse the loss of Africa's forests”.

Already the hottest continent, Africa is expected to warm up to 1.5 times faster than the global average, causing longer, more severe droughts, raging storms and floods and unpredictable rainfall. This will make it harder for African farmers to grow key crops such as wheat, rice and maize, thereby endangering food security.

Add to that the expected population spurt in Africa, the youngest continent, and the challenges are daunting. According to a UN report, Africa will have an additional 1.3 billion people by 2050. Most of the growth will happen in the cities, posing a challenge for African governments to ensure smart and sustainable urban planning.

This is the context within which Kenya’s decision to co-host the One Planet Summit and actively fight climate change becomes significant. In the run-up to the Summit, Monica Juma, cabinet secretary in Kenya’s ministry of foreign affairs, said, “We’ve begun to frame Nairobi as the world global environmental capital.” She indicated that Kenya was determined to upscale discussions on the sustainable use of natural resources in line with United Nations’ Sustainable Development Goals.

A lot of jargon has been thrown around – better land management, biodiversity protection, the promotion of renewable energy and the need to foster resilience and adaptation among populations vulnerable to the effects of climate change. These are not merely symbolic for Africa. They are substantial. The continent is uniquely placed in the climate change debate. It has both immense challenges and extraordinary opportunities.

Preservation of biodiversity is a key issue for the African continent. Experts say climate change, alongside land degradation and habitat loss, could cause some African animal species to decline by as much as 50 per cent by the end of the century. The threat to Africa’s forests is dire. Nearly 20 per cent of the African continent is covered by forests, including the world’s second-largest tropical rainforest, the Congo Basin Forest, known as the “green lung of Africa.”

As President Kenyatta will say in his call to action at the One Planet Summit, “forests constitute a resource of great economic, cultural, spiritual and scientific value whose disappearance would be irrecoverable”. In November, Patricia Espinsoa, Executive Secretary of UN Climate Change, said: “Few other places on earth suffer the devastating impacts of climate change and biodiversity loss like the continent of Africa.”

Some African entrepreneurs are already investing in innovation and green energy. Malian Samba Bathily, CEO of Africa Development Solutions, recently said that as he crossed the continent, he felt proud to have been “…involved in the production of more than 1,000 MW of hydro-electric power… the creation of data centres and solar installations in more than 1,600 localities, benefiting between nine and 10m people”. Bathily incidentally supports the two-year-old Ghana-headquartered AfroChampions Initiative, which seeks to build up homegrown multi-national companies across the continent. In itself, AfroChampions is a powerful indicator of African optimism and opportunity, despite the challenges.

Accordingly, the One Planet Summit in Nairobi could usefully signal to the wider world both an urgent need to act as well as deliberative intent. How?

The One Planet Summit seems to be built for innovation. Unlike other, more crusty United Nations climate change conferences, this summit is young. It was born on a whim and a prayer in December 2017, when Macron hosted more than 50 world leaders in Paris to celebrate the anniversary of the UN climate compact agreed in the French capital in 2015. America’s newly elected president Donald Trump had announced the withdrawal from the Paris pact of the United States, the world’s second biggest polluter after China.

The painfully forged international consensus on climate action seemed to be unravelling. There seemed little certainty about the fate of the pledges produced in Paris, under the aegis of the UN, to hold the increase in the global average temperature to “well below 2°C above pre-industrial levels and to pursue efforts to limit the temperature increase to 1.5°C above pre-industrial levels”. Macron’s One Planet Summit might well have been a one-off, an ambitious irrelevance.

It was not as the next One Planet Summit in New York was to reveal with greater adepts.

All the talk in New York was about green finance, collaboration and investing in the transition to de-carbonised economies. Disparate countries reported on actual progress as well as their very real problems. There was mention of two pan-African science skills courses, which were launched in July 2018 in Nairobi and Dakar.

This will be important in building an African scientific community to prepare for climate change and agricultural adaptation. Reported accomplishments included the incubation of seven programmes to support trans-boundary river basin organizations by the Agence Française de Développement and the World Bank is supporting the Niger Basin Authority. The 2018 One Planet Summit said 1.5 million euros had been committed to 30 countries in Africa, where 20 adaptation projects had already been identified.

This could be the right way to invest in the future. Joyce Msuya, a Tanzanian microbiologist who serves as Acting Executive Director of UN Environment, recently pointed to an example of African “ingenuity” when faced with climate change.

“On February 7,” she said, “a boat made entirely of recycled plastic — the world’s first — cruised into a quiet harbour in Zanzibar after two weeks at sea.” It was, Msuya added, a remarkable example of human ingenuity and offered the possibility Africa can affect “systemic change”.

Will it have the resources for it? Strategic assistance will be essential. After 2018, it became clear that the One Planet Summit was actively engaging and recruiting public and private actors in the fight against climate change. This will be key for Africa. According to the African Development Bank (AfDB), the continent will need $20 to 30 billion every year for the next two decades to help fund climate change adaptation and resilience and accelerate the transition towards a low-carbon economy.

The Nairobi Summit, which will bring together key world figures, CEOs and civil society leaders, must respond to the call to action.