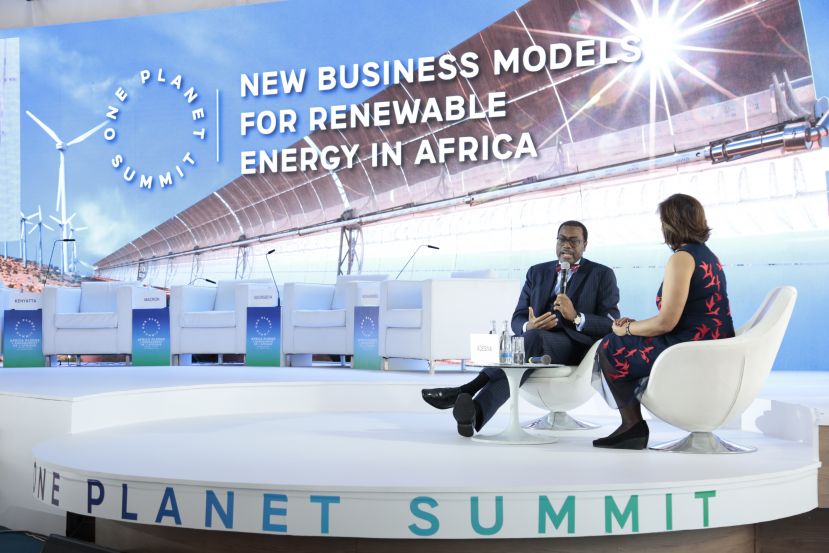 The African Development Bank will double its climate finance commitments for the period 2020-2025, the Bank’s President announced today at the One Planet Summit taking place in Nairobi. Akinwumi A. Adesina said that the Bank would commit at least US$25 billion towards climate finance.

Speaking at a plenary in the presence of Heads of State, including President Uhuru Kenyatta of Kenya, and French President Emmanuel Macron, Adesina also announced the Bank is on course to achieve its target of allocating 40% of its funding to climate finance by 2020, a year ahead.

“The required level of financing is only feasible with the direct involvement of the entire financial sector,” said Adesina. “Consequently, the Bank launched the African Financial Alliance for Climate Change (AFAC) to link all stock exchanges, pension and sovereign wealth funds, central Banks and other financial institutions of Africa to mobilize and incentivize the shift of their portfolios towards low carbon and climate resilient investments.”

The Bank made another milestone announcement. “It is not good enough to simply ask countries to stay away from polluting technologies,” Adesina said. “We have to be proactive in exploring alternatives. We will therefore be launching the ‘green baseload’ facility under the Sustainable Energy Fund for Africa (SEFA 2.0) to provide concessional finance and technical assistance to support the penetration and scale-up of renewable energy, to provide affordable and reliable renewable energy baseload.”

Several donors, including Canada, Denmark, Germany, Norway, Italy, the UK and USAID have indicated their interest in this transformative instrument, which will also help to replace coal. The African Development Bank has played a critical role in building Africa’s clean energy capacities.

The Bank’s last investment in a coal project was 10 years ago. Additionally, and in line with its ambitious New Deal on Energy for Africa, 95% of all Bank investments in power generation over the 2016-18 period have been in renewables.

The “Desert to Power” program, a $10 billion initiative to build a 10 GW solar zone across the Sahel—the largest in the world— would provide electricity for 250 million people.  Together with partners such as the Green Climate Fund and the EU, the Bank has now financed the first project under this Initiative: The Yeleen Rural Electrification Project in Burkina Faso.