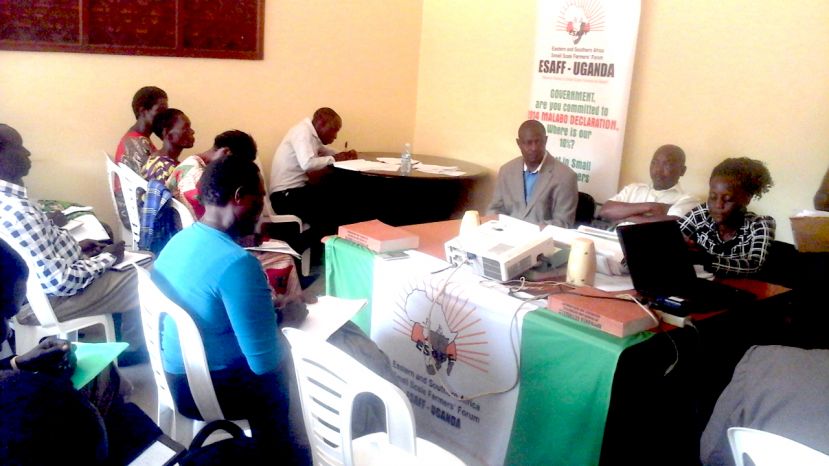 Farmers during the budget dialogue

Farmers are saying the budget intends to benefit only large scale farmers in the country at the expense of the small holder ones.

Small holder farmers  who met last week  during the farmers  budget dialogue  that was hosted by the  Eastern and Southern Africa Small Farmers  Forum( EASFF ) Uganda chapter said most of the challenges affecting small holder farmers will not be solved by the budget as it was presented by the  Minister of Finance Planning and Economic Development Matia Kasaijja  during the budget speech.

They urge that the most important components in the sector were allocated little resources yet they play a big role towards supporting the small holder farmers in the agriculture sector. The most subcomponent that farmers believe are crucial include extension services, access to cheap irrigation equipment’s and scientific researches knowledge.

“We applaud the government for increasing the budget allocation from Shs893billion in FY2018/19 to UGX1.05trillions in FY2019/20 but the current budget may not solve the key issues in the sector because of underfunding of the key components in the sector,” Masudio Margret a small holder farmer from Adjuman said during the dialogue at EASFF head offices in Ntinda.

In the sectors budget (agriculture) government allocated Shs1.05trillions in financial year 2019/20 of which key subcomponent in the sector were under funded.

For example, agriculture research under the National Agriculture Research Organization (NARO) was allocated only Shs81.43billion yet the funds required in the financial year is Shs129.7billion. This leaves the organization with a funding gap of Shs48.3billion.

On the side of Recruiting Agriculture Extension Officers the central government allocated Shs107 billion yet the total budget in the financial year were budgeted to cost Shs230.2billion this leaves the Exercise with funding gap of Shs108.2 billion.

According to the cross section of farmers who attended the meeting such funding gap will impact farmers drastically because farmers in some parts of the country will not have access to agricultural extension services due to failure by the ministry to recruit extension services providers because of limited resources.

The current recruitment of agricultural extension workers stands at 3,827 of 5000.The current ratio of extension to farmer are 1:1800. The recommended is 1:500.This would require the government to recruit 12,000 extension staff.  The 5000 extension staffs were for 116 districts in 2015/16. The Districts have since increased to 128, an addition of 12 districts and 94 sub counties.

The approved structure is 13 officers at district level and 2+1 extension staff at sub county level (2 being crop and livestock and 1/3 being fisheries).

“As small holder farmers we need these technical people because they teach farmers how to improve their productivity. The extension officers are also critical to move research from the lab to the field and to ensure a return on investment in research by translating new knowledge into innovative practices” Explained Ngunga Tabula from Masaka.

Bagaga Ronald the Program Officer, Research and Policy at Eastern and Southern Africa Small Scale Farmers' Forum (ESAFF) Uganda said the continued under funding in the agriculture sector will keep the majority of Ugandan under poverty which is big obstacles towards attaining sustainable Development Goals.

He added that under funding priority key components in the Agriculture sector will also undermines Government to achieve the National Development Plan Phase II of the agriculture sector.

“The National Development Plan Phase II talks of increasing production and productivity of agricultural commodities and enterprises. Alongside strengthening the agricultural services institutions and the enabling environment however these objectives among other will not achieved if limited resources are allocated to the sector,” he explained.

In their final conclusion the farmers urged government in the upcoming financial year 2020/21 to ensure that   the budget for the sector are in line with the Malabo declaration which calls for African states to  allocate at least 10% of their National Budget to Agriculture Sector of which Uganda is signatory to the convention.

Other key issues which they want Government to do is to involve small holder farmers in the budget formulation process. According to the farmers who attended the meeting, government on many occasions has been sidelining them when it comes to budget process this has left their views not being considered in the final budget paper.

Among the key actions in the budget for Agriculture in the financial year, government will focus more on   Provision of storage facilities and linking farmers to agro-processing facilities to support agro-industrialization.  Delivery of quality inputs and services including seed and planting materials, mechanization, fertilizer, agricultural credit and extension services among other key action.

More in this category: « Ruparelia Group Eyes Chinese Flower Market How Many Reports Will It Take To Start Acting On Climate Change? »