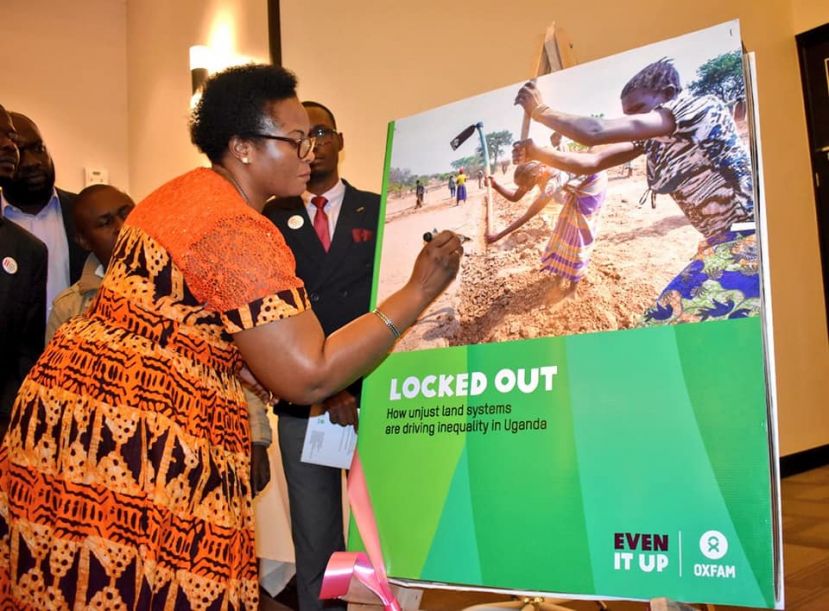 Prevailingland inequalities in the country have negatively affected the social and economic development of Uganda and for that matter, there is a need to review land laws and policies to correct what is wrong like land acquisition and succession, state minister for lands, Persis Namuganza has said.

The minister was Friday speaking at the launch of a report researched and authored by Oxfam Uganda titled ‘Locked out: How Unjust Land Systems Are Driving Inequality In Uganda’ at Mestil Hotel in Kampala.

Namuganza acknowledged that land is a central factor in ensuring human dignity and human rights and that any inequalities associated with land can lead to poverty, inhibit national growth and increase food insecurity.

Land inequalities like land grabbing, evictions and land pollution much of it happening backed by government policies, laws, and political influence, have dominated public discourse yet not many solutions have been provided.

Inefficient laws, disregard for laws, total lack of laws and policies and a poor justice system have been blamed on the rampant land inequalities. To some extent, cultural practices have been blamed for sideline women when it comes to land ownership and land use. Many places women are not allowed to own land.

And with the land size of Uganda not enlarging and increasing in size while the population is expected to increase to 100 million people by the year 2050, Namuganza warns that there will be increased pressure on land something that will lead to more inequalities being registered including the marginalization of women and PWDs.

The environment, according to the minister, will not be spared as evictions will lead to evicted people will find their way into wetlands and forests leading to deforestation, dumping and building in wetlands resulting in catastrophic climate change.

She, however, on the positive side, said that the government has taken steps to address the issues of land inequality through registration of customary land and issuance of a certificate of ownership and tabling of laws that aim at ensuring that women, PWDs and the poor also own land among other interventions.

According to Oxfam Uganda country director Edward Mwebaze, the study resulting in the launched report explored how land governance and administration contribute to inequality in Uganda.

It also looked at how laws, policies, regulations and cultural practices can be made more inclusive and abate land inequalities. It analyzed land ownership trends, reviews land use impacts and provides policy proposals to address these inequalities.

The report notes that while land can be an important resource for reducing poverty and inequality, the land laws and policies fail to make poor people’s lives better but rather empower the rich to trample on the rights of the poor.

“To achieve national and international development targets, decisions regarding land tenure, control and ownership must be inclusive and consider the interests of the poor and vulnerable – especially women,” the report reads in part.

The report asserts that land inequality worsens when the most vulnerable in society are excluded from accessing resources to improve their lives and livelihoods and influence decisions about how society is managed.

“Its causes are often historical and entrenched in a framework of laws and policies that government ownership, access and use of resources. These resources include land. Inequality may be eased or worsened by the political ideologies that define the agenda of economic development,” the report says further.

Oxfam further calls for specific interventions to resolve the current injustices against women, who dominate land-based production processes and are also a big part of the population at the bottom of the pyramid. The government should hasten to enact laws and regulations that provide for women ownership of land including succession in the event of the death of a spouse.