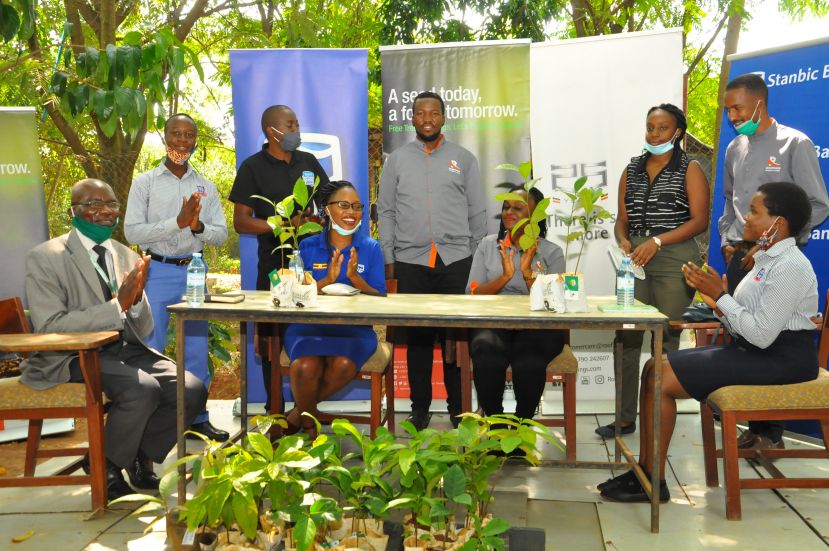 The partnership will see the two entities plant over 15,000 trees in over 200 schools across the country.

The ‘Forever Forestry’ initiative with the tagline ‘A seed today, A forest tomorrow’ is a flagship CSI initiative of Roofings Group housed on an acre of land with a dedicated team that has the capacity to produce up to 1,000 seedlings a day.

While announcing the partnership, Ms Barbara Kasekende –Stanbic Bank Uganda’s Corporate Social Investments Manager noted that the bank had tailored its CSI arm to focus on sustainability and environment transformation across its projects.

She said, “The Bank’s Corporate Social Investment projects are to foster sustainability within communities with a focus on Social, Economic and Environmental (SEE) goals as we seek to ensure shared value in societies and the environment in which we operate. Promoting tree planting is one such initiative which seeks to promote conservation of the environment through the Forever Forestry Initiative.”

She continued, “We believe the youth demographic as the majority in our nation and communities can be used to create impact through environmentally friendly projects such as tree planting with a hope to groom them into responsible citizens in their various communities who know the value of environmental conservation. I am happy to state out of the targeted 15,000 trees, we have so far planted 4,000 trees and will continue to do so until the target is completed.”

Roofings Group contributed seedlings worth UGX 60 million to enforce the regreening project across the nation through schools.

She says it has become apparent through research that we need an immediate and combined course of action to save our environment.

“Roofings group is passionately driven towards protection and conservation of the environment through its Forever Forestry Initiative. The name doesn’t leave any secret to the explanation. We want our beautiful forests to thrive,” She added.

While commenting on the partnership with Stanbic Bank, Nashila said, “Roofings Group’s strong partnership with Stanbic Bank gives us the opportunity to reach a vast majority of the community across the country through our contribution of 15,000 seedlings worth ugx 60 million. We are therefore facilitating the Stanbic National Schools Championship program in regreening hundreds of schools which in turn provides environment stability.”

Stanbic also recently partnered with UBL on the ROOT campaign to create awareness on tree planting to fight deforestation in a bid to foster sustainable development and save the environment.

“Sustaining our environment is a priority for us and we do not take these partnerships lightly. Engaging the youth and making them apart of these initiatives will certainly take us one step further to enforcing shared responsibility.” Kasekende concluded.