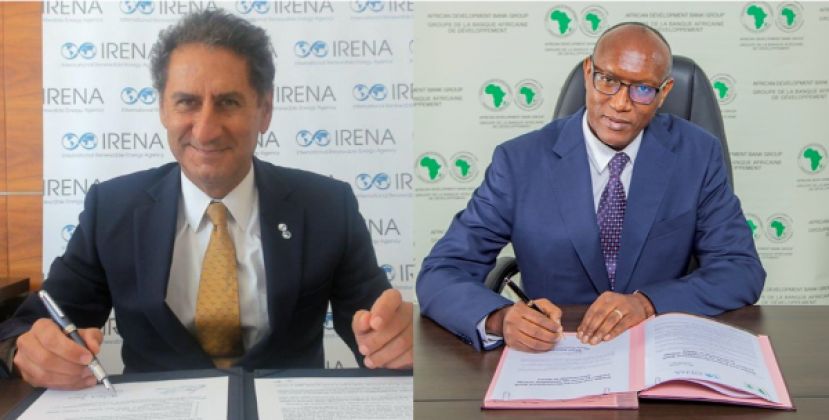 The International Renewable Energy Agency (IRENA), and the African Development Bank (AfDB), have agreed to work closely together to advance the continent's energy transition through joint initiatives that support investments in low-carbon energy projects.

Under the Declaration of Intent, the two entities confirmed their wish to collaborate on supporting the continent's energy transition under a framework of core activities. These include co-organising renewable energy investment forums as part of IRENA's contribution to the Climate Investment Platform, and collaboration on the Bank's annual Africa Investment Forum. Furthermore, strong emphasis will be placed on concrete support for enhancing the role of renewable energy in Nationally Determined Contributions and sustainable development objectives.

Mr. Kariuki said: "Driven by the aspiration to harness Africa's huge renewable energy potential, the African Development Bank is today at the forefront of investing in renewable energy in Africa. The Bank's partnership with IRENA will advance this aspiration and support Africa's energy transition and our goal to achieve universal access to affordable, reliable, sustainable and modern energy in Africa by 2030."

IRENA's Global Renewables Outlook report, released earlier this year, revealed that sub-Saharan Africa could generate 67 per cent of its power from indigenous and clean renewable energy sources by 2030. Further analysis shows that the energy transition would boost GDP, improve welfare and stimulate up to 2 million additional green jobs in sub-Saharan Africa by 2050.

Mr. La Camera said: "The African continent has some of the most abundant renewable energy resources in the world and the potential to transform outcomes for millions of people through the accelerated deployment of a renewables-based energy system. Renewables will increase energy security, create green jobs, advance energy access, including clean cooking, and help build resilient African economies.

"This agreement represents the type of coordinated international cooperation that is the cornerstone of the realisation of sustainable development in Africa and the achievement of Paris Agreement goals," he continued. "We will pursue an action-oriented agenda that puts African countries on a path to realising their full renewable energy potential."

The declaration also provides for collaboration on the African Development Bank's Desert to Power Initiative, which aims to mobilise public and private funding to install 10 GW of solar power by 2025 in 11 countries in the Sahel region of the African continent.