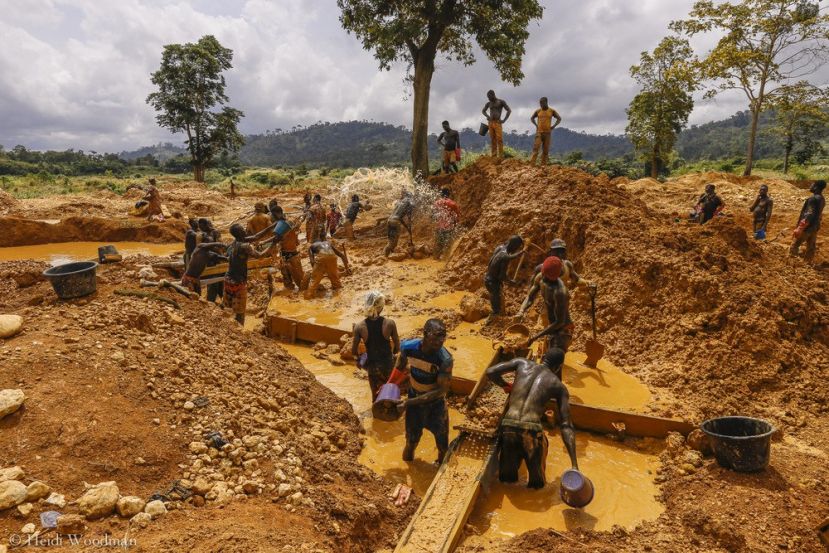 Gold is possibly the most mined mineral in Uganda. Even with the monetary value attached to it, it remains a rudimentary adventure for artisanal miners with little or no large scale gold mining currently ongoing.

The government carried out an airborne geophysical survey and geological mapping to identify areas with minerals including gold, only Karamoja missed the exercise because of insecurity, but no high profile company has been able to venture into large scale gold mining.

According to Africa Centre for Energy and Mineral Policy (ACEMP), the places most known for gold mining in Uganda albeit rudimentarily are Mubende (Kitumbi, Kayonza gold fields), Namayingo gold fields on the shores of Lake Victoria in Eastern Uganda, the Buhweju gold fields in Western Uganda and Karamoja.

Artisanal And Small Scale Gold Mining (ASGM) in Uganda is highly informal with no high tech exploration but rather discoveries are made by ‘barefoot geologists and sniffer dogs.’

The challenges of the artisanal miners are varied but one that stands out and has proven to be fatal is the continued use of two hazardous chemicals to hasten the process of extracting gold and separating it from the soils. These chemicals are mercury and cyanide. They are also hazardous to the environment.

World Health Organisation (WHO) says that mercury is toxic to the central and peripheral nervous systems. The inhalation of mercury vapour can produce harmful effects on the nervous, digestive and immune systems, lungs and kidneys, and may be fatal. The inorganic salts of mercury are corrosive to the skin, eyes and gastrointestinal tract, and may induce kidney toxicity if ingested.

LAWS SILENT ON MERCURY USE

He explained that part six of the Mining Act, 2003 addresses the protection of the environment in mining operations but puts that responsibility into the hands of the holder of an exploration licence or mining lease who must carry out an environment impact assessment of his or her proposed operations in accordance with the provisions of the National Environment Act, Cap 153.

“Unfortunately, this requirement is only for holders of exploration licences and mining leases and does not cover holders of location licences who are predominantly small-scale miners applying mercury and cyanide in largely gold ore tailings to enhance their production,” Mr. Binyina stated.

While most of artisanal gold miners are illegal, unlicensed and not regulated, Mr. Binyina reveals that there is a steady increase in the number of small-scale gold miners holding location licences and applying mercury and cyanide in gold extraction.

To avert this, the Mining and Minerals Policy 2018 proposes the organization and legislation of artisanal and small-scale mining operations and management of occupational health, safety and environment with special attention to mercury use in gold extraction in the ASGM sub-sector.

The policy also establishes a mechanism to monitor and enforce compliance to health, safety and with this policy, government seeks to promote the use of environmentally sound exploration and mining techniques and technology and to regulate the use of toxic and hazardous substances such as mercury and cyanide.

A revised national environment law has been aligned with the new mining policy framework to promote sound management of chemicals and products to protect human health and the environment.

Also, National Environment Management Authority (NEMA) is charged with engaging the Directorate of Geological Surveys and Mines (DGSM) to establish criteria for the classification of hazardous chemicals and products containing hazardous chemicals in accordance with the hazards they present to human health and the environment.

A study by ACEP on mercury importation reveals that informal in-country trade flows becoming increasingly evident. "Interviews from mercury trade statistics indicate that South Africa and Kenya are the principal source countries, although Malaysia appears to have dominated official mercury imports over the past two years.

According to the Uganda Revenue Authority (URA), eight consignments totalling 615 kg entered the country between January 2013 and February 2016, mostly from Kenya, as stated in official records. A representative of the URA emphasized that smuggling is likely to be rampant given the apparent lack of logistical and regulatory constraints," ACEMP said.

The leading actors in the mercury value chain are foreign traders from Kenya, Tanzania and DR Cong or sell local trader who takes it mining sites. The local trader according to ACEMP are also gold buyers who supply it to miners. Chinese mining companies and jewellery shops owned by Asian also trade mercury.

Malaba and Busia border posts on Uganda’s eastern border and Mutukula on the Southern border with Tanzania, are the major country's entry points for smuggled mercury. Uganda has also been reported to be a transit country for a mercury trade route feeding into the Democratic Republic of Congo (DRC).

THE CASE OF CYANIDE

Alongside mercury, cyanide was another preferred deadly chemical to extract gold but ACEMP says many operators are abandoning their cyanide plants due to the high operating costs while others do not operate at full capacity.

An interview by ACEMP with an operator of a CIP plant in Kasanda reveals on average one needs around Shs6.7 m daily to sustain a commercial CIP. Average ore grade of 3g/tonne would cost approximately Shs160m to produce 1.5 Kg of gold valued at approximately Shs200m living a meagre profit margin of Shs40 million in month.

However close to mother load ore grades of 5grams - 55 grams per tonne  could cost less than Shs40 m to produce between 1-5 kilograms in a week, but hastens to add that these ore grades are a rare occurrence. This largely explains the struggle by majority of ASMs to sustain such a capital intensive technology

In conclusion, ACEMP believes that reduction in mercury use will be more possible with inclusive cooperation and more business support in ASGM supply chains rather than hard policing and enforcement. Primary barriers to mercury reduction are driven by the cost of business for ASGM groups and buyers.

This means that the cost burden for shifting to hg free ASGM methods cannot be left entirely to these two groups. NAP strategies have to allow for testing, developing and incentivizing alternative options to mercury.